December 30, 2013 (Ramona)--After 20 years, Hawk Watch, a popular wildlife educational program in Ramona featuring  hawks, owls and eagles, has been cancelled for 2014 .  Visitors can still go birdwatching on their own at the Ramona Grasslands  Preserve, but there will be no organized presentations or up-close looks at captive birds of prey.

Wildlife Research Institute, which ran the program, announced the cancellation on its website with no explanation.  But the decision likely stems from trouble raising funds for the nonprofit after news broke that its founder, David Bittner, was sentenced in federal court  in August after pleading guilty to unlawful taking  a Golden Eagle without a permit and failing to file any data reports for a four-year period on birds that he had banded.

Bittner was sentenced to probation and a  $7,500 fine.Critics called that a slap on the wrist, since Bittner and the Wildlife Research Institute had raked in more than $600,000 in consulting fees for his work on behalf of large energy companies. Iberdrola and Pattern Energy hired him to write reports justifying their wind projects, Tule Wind in McCain Valley and the Ocotillo Express Wind Facility. Sempra Energy also hired Bittner as its eagle consultant for its massive Energia Sierra Juarez Wind in Baja California.

The sentencing memorandum reveals that Bittner had a long history of noncompliance with state and federal laws protecting birds of prey.

In 1979, the  state of Ohio and the federal government revoked his bird banding permit after a conviction on several counts, yet he continued banding wild raptors after his permit was revoked. Bittner lied to probation officials about a lapsed permit, and in fact had no active federal permit to band birds from 1980-1997.  It was reactivated in 1997 after Bittner filed an application from his new location in Ramona, California.

After the reauthorization, Bittner advised that he had retained nearly 2,500 bird bands, which are strictly regulated – but never accounted for his activities. Bittner later lost the permit again and has not had a valid permit since 2000 in California due partly to his failure to provide required data.

In 2011 he provided the state Department of Fish & Game with a report on nearly a thousand raptors  including 200 Golden Eagles that he banded from 2000 to 2011—with no state permit. His federal permit expired in 2010 and was later renewed despite questions over 300-400 bands not accounted for.  These included eagles in San Diego and Imperial County as well as Orange, Riverside, San Bernadino and Kern counties.   Most of those eagles were also tagged and 44 were fitted with transmitters.

Bittner was also found to be using wild raptors in educational programs for the public at his Wildlife Research Institute facility in Ramona.  He illegally trapped and marked 164 birds while his permits were lapsed in 2010, including 29 Golden Eagles in San Diego and Imperial County.   He also illegally banded an injured bird and released it with multiple transmitters, a practice bird experts have said had no scientific justification. Witnesses said it had trouble flying; Bittner noted it was found dead later, apparently a victim of a wind turbine, but Bittner never provided flight data on the bird.

He was also found to illegally have four freezers full of dead birds including 26 migratory birds, of which 11 were golden eagles, some dating back years. Dead eagles are required to be turned over to the federal government immediately so that feathers may be used by Native Americans for ceremonial purposes.

He has never published any scientific papers on his survey findings. Nor has he turned over results to state or federal authorities, as he is required by law to do. Instead, his data has only been provided to his corporate clients.

As part of his probation terms, the federal government asked him to submit data on thousands of unreported bird bands issued to him, as well as telemetry data from transmitters, though the latter were not provided by the government. The government also required that Bittner return all bands still in his possession to the government and provide full accountability for them. Failure to do so could result in probation being revoked.

Bittner claimed he had no time to manage permits in eight states when questioned by federal authorities.

Before the sentencing Bittner’s lawyer, Gerissa Santos, argued that her client had been punished already. Due to the negative publicity generated by the case, he had lost clients, who paid for his services. She also argued that Bittner is set to retire, and wanted to protect the birds.

Santos also argued that all this has negatively affected the Wildlife Research Institute (WRI).  She indicated the Institute  might close in 2014 due to lack of operating funds. 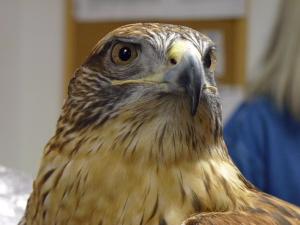 Bittner’s lawyer closed by saying that “no harm has been done to any birds.”  But  that point was disputed by the prosecution.

“Birds were harmed,” Assistant  U.S. Attorney Melanie K. Pierson argued at the sentencing hearing. She concluded that Bittner had been far more concerned about economic gain than the bird’s well being, Pierson concluded.

Bittner and his wife Leigh, have said they raised the money necessary to buy the Ramona Grasslands and sell the property to the Nature Conservancy. This is raptor habitat, including most recently, a reported nesting pair of bald eagles. Despite the evidence provided by the prosecutor, Bittner insisted that “everything we do is standard operating procedure.”

Donna Tisdale, chair of the Boulevard Planning Group and an officer with the Protect Our Communities Foundation, has asked for  a review of  the validity of  Bittner’s studies of local wind projects, including Tule Wind, which has been approved by the federal government but has not yet been built.

“We support the Justice Department’s vigilance in prosecuting Bittner for his serious transgressions and unlawful behavior,” said Tisdale, who has long contended that there are eagles in areas slated for wind turbines, where Bittner claims there are none. ““When unethical and basically corrupt experts like Bittner side with industry over avian protection,” Tisdale concluded, “our beautiful birds literally get clobbered with the blunt end of the turbine blade.”

I would like to share some wind turbine related golden eagle killing facts wth readers. These are facts that are being kept from the public.

In California the current FWS estimated wind turbine mortality to golden eagles from about 3000 MW of installed wind energy capacity is 109 per year. Pay attention to this.............. About 60 of these golden eagles killed annually are from the wind projects at Pacheco Pass, Montezuma hills and the wind turbines in the Tehachapi region. These are golden eagles killed outside of Altamont Pass that do not include totals from futher south. The totals would be much higher with proper studies, especially at Altamont Pass where new estimating factors and undersized carcass search areas have been put in place that have lowered the "official" reported golden eagle mortality.

The fact is no matter where wind turbines are placed in eagle habitat, they kill eagles. In the Western States of California, Idaho, Colorado, Montana, Nevada, New Mexico, Oregon, Texas, Utah, Wyoming and Washington, most of the industry’s 32,000 MW of installed wind energy capacity is located in eagle habitat. If one were to believe the low mortality estimate of 109 golden eagles killed per 3000 MW, this still works out to one eagle death per 27.5 MW of installed capacity. Projected out across the Western US at this rate, the estimated kill rate is 1164 golden eagles annually.

I want everybody to think back about the highly publicized (AP) 2013 Journal of Raptor Research Study reporting or suggesting that 85 eagles were killed by wind turbines over the last 15 years in the United States. Most newspapers across the country ran a stories about this so called study.  It was pure nonsense and it was created to deceive because the truth is that thousands and thousands of eagles have been killed by US wind turbines iover the last 15 years.
The golden eagle is in a serious state of decline but studies that would show this have been deliberately avoided by the wind industry,their shill biologists, and Interior Department.  At best that I believe there are less than 300 nesting pairs of golden eagles left in all of California and Oregon.

In these two states this expands out to a population of no more than 1000-1200 golden eagles when including all juveniles and sub adults.

Just two wind farms, Altamont Pass and the Montezuma Hills are killing at least 75 eagles per year. This is not even close to 5% wind mortality threshold stated in the Eagle Conservation Plan.

With the current FWS Eagle Take Policy, the FWS's objective is to manage the species by authorizing take (kill) at a level that is less that 5 percent of the local area population. Despite the low estimated eagle mortality derived from filtered wind industry studies, the mortality rate from these two wind farms in CA is not even close to 5% and is in the range of 25%-50% per year for the regional population. In fact with proper studies and analysis I believe that that the golden eagle mortality from both the Montezuma Hills and Altamont Pass Wind Resource areas would exceed 5% percent of the total golden eagle population for all of California and Oregon combined. This amount of mortality far exceeds any reasonable or ethical meaning for the term "regional population.

To compensate for this killing the FWS has stated there are 526 golden eagles living within 150 miles of these two projects. This figure is far from being true. In fact I believe that the FWS would have a very hard time proving with actual occupied/productive nest site data, that there are even 100 nesting pairs of golden eagles now left in California.  In other words, this proof would exclude all the bogus nest site data (empty or abandoned) and vague eagle territory data that is currently being used to embellished golden eagle population estimates.

It is very important for the public to understand this ongoing charade being put on by the wind industry and our government agencies.  A number of massive wind projects are being proposed for golden eagle habitat located in Montana, Idaho, Utah, Colorado Nevada, and Wyoming and the truth about these deadly turbines will be very elusive.     The Fish and Wildlife Service on the other hand will be seeking public input on the issuing an eagle take permits for these projects.  But the FWS service doesn't need any input because they know about the eagle slaughter taking place at wind farms, they are not disclosing it to the public. Knowing these impacts and then asking for input when they already have the information, is silent fraud.

"Several witnesses reported a mortality rate of 90% for birds mounted with Bittner’s transmitters during one nine-month period..............90% mortality from what causes? Primarily wind turbines? If so is this why he never supplied the missing data to the federal government?  Could it be that he did not want to bite the hand that was feeding him and that the fate of these birds meant nothing?   Is there still an ongoing investigation?  I think there are still too many unanswered questions.

I wonder just how healthy the environment of our beautiful and pristine back country will be, along with eagles, other birds of prey, and other WILDlife, after all of the destruction soon to be thrust upon it by numerous wind and solar companies is completed?    That doesn't seem to be an issue with them, though.  But $$$ is.   Just ask Mr. Bittner.

A slap on the wrist, indeed. But that's hardly surprising, given that the eco-energy industry pimps he's whoring for were just provided with a thirty year moratorium on killing endangered birds of prey.