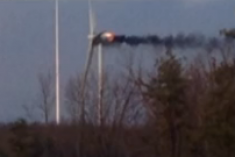 Will Iberdrola use fire-prone Gamesa turbines in East County?

March 20, 2014 (San Diego’s East County) – Iberdrola wants to build Tule Wind, an industrial wind facility in McCain Valley. The company has claimed that the odds of one of its turbine catching fire are infinitesimal.  But on March 15, a wind turbine at Iberdrola’s Locust Ridge wind facility in Mahonay City, Pennsylvania caught fire, sending flames arcing out until ultimately the fire burned itself out, as shown on video. This is the latest in a long string of fires involving Gamesa turbines including some at Iberdrola facilities.

What would happen if this occurred in McCain Valley, amid fire-prone brush in a hard-to-access area where campgrounds are located at the end of a canyon with only one access road, set to be lined by wind turbines?  And why aren't Supervisors taking steps to protect public safety by barring fire-prone wind turbine products in our region?

The valley is in the path of the 2007 Harris wildfire, which was fueled by 100 hurricane-force winds.  Each turbine is set to be filled with hundreds of gallons of flammable lubricating oil.  Firefighters can’t fight fires under whirling, burning turbine blades and aerial drops don’t work at heights over 300 feet or so.  The turbines are 500 feet tall.

The turbines at Iberdrola’s Locust Ridge project were made by Gamesa. Gamesa has had numerous wind turbine fires, including the turbine fire at the Kumeyaay Wind facility in Campo in December 2013 that sparked a brush fire and threatened a nearby home, as ECM reported.  Our story also recounted Gamesa’s troubled history of wind turbine fires elsewhere.

An earlier explosion at the same Kumeyaay Wind facility in 2009 caused all 25 turbines to be off-line for months before they were all replaced, a story that ECM was first to publish, including an eyewitness account of a "blue flash" that radiated through the wind facility. If it hadn't been snowing at the time this occurred late at night, a major brush fire could have been sparked.

Will Iberdrola use Gamesa wind turbines at its planned Tule Wind project in McCain Valley?

Iberdrola won’t say what brand of turbines it plans to install.  But Iberdrola  controlled nearly 20% of Gamesa  shares and had pledged to buy at least half of its turbines through 2022 from Gamesa, ECM reported back in 2012.

Residents and retired Cal Fire Batallion Chief Mark Ostrander warned San Diego Supervisors about fire dangers posed by wind turbines in this area, but the majority voted to approve Tule Wind, with only Supevisor Dianne Jacob voting against the project. The federal government has also approved Tule Wind on federal lands in McCain Valley, as has the Bureau of Indian Affairs for a portion of the project on tribal lands.

Simple, they do not give a darn!

Any way, we were already "crushed" by Governor Moon Beam so I guess we do not exist?

Bet they would've responded differently if it were in their backyards. Ted Kennedy for example. A big proponent of wind power until the view in front of his family home at Martha's Vineyard was threatened with wind farm development. Then he did everything he could to block it. It was never built.
And they'll even throw in shade ramadas and BBQs as MITIGATION!
First they desecrate the landscape and then pose a 24/7 risk of burning it down. What a deal.