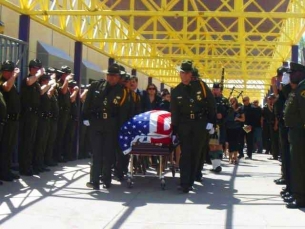 “As a result of some of the media attention and as a byproduct of the investigation we are following up on a number of leads here in the U.S. and in Mexico,” FBI special agent Darrell Foxworth told East County Magazine in an interview today. “This is one of the highest priority investigations that we are conducting here in the Southern California law enforcement community.” The FBI previously announced a $100,000 reward for information leading to arrest and conviction of the killers, plus a $10,000 reward for information leading to recovery of Rosas’ stolen .40 caliber service pistol, a Heckler-Koch P2000.

Foxworth added, “ We have over two dozen investigators and prosecutors that are supporting this investigation, mainly U.S. Border Patrol agents, Immigration and Customs enforcement, San Diego Sheriff, DEA (Drug Enforcement Agency), the U.S. Attorney’s office and the FBI.” Executives within the Department of Justice and the Department of Homeland Security are also aware of the tragic event, he said.

Although Mexican authorities have arrested suspects (reportedly based on identification made by a member of a human smuggling ring) the FBI investigation continues. “In the U.S., we have not arrested or charged anyone specifically in the killing of Agent Rosas. This is an active investigation and we still need the public’s help to provide any and all information…The smallest piece could be the missing piece of the puzzle,” he said. “It could be just observing some suspicious activity on that date, or prior to that date, which could assist investigators.”

Rosas was shot multiple times while responding to reports of suspicious activity in an area known for smuggling of drugs and human trafficking. The shooting occurred close to the location where gunfire was exchanged July 17 between U.S. Border Patrol agents and people in a Dodge truck that Mexican officials have stated may have been smuggling drugs. Those smugglers evaded authorities.

No eyewitnesses have come forward to speak to media about the murder of Rosas. However Britt Craig, leader of the Campo Minutemen, says he was monitoring the border area at about 9 p.m. on July 23 when he heard several shots and notified the Border Patrol.

“I heard four spaced shots like bang, bang, bang, bang,” Craig has stated. “Then there was a shooting fairly rapidly—three or four bangs, just as fast as you could shoot.” In an interview with the Orange County Register, Craig observed, “In the daytime, people hunt and target practice, but at night it’s usually a bad thing when guns go off.”

Craig’s wife, Deborah, expressed doubt that Mexican officials have the right suspects, noting that those who identified the shooter are purported criminals. Deborah Craig, who attended the funeral for Agent Rosas last week in El Centro, said some law enforcement members confided that “they feel it looks like a `round up the usual suspects’ dog and pony show. “ She expressed suspicion that the killing may have been in retaliation for prior Border Patrol enforcement actions. “It is odd how close to the border the shooting happened,” she noted, adding that undocumented border-crossers usually “just run back and jump the fence when they are that close.” 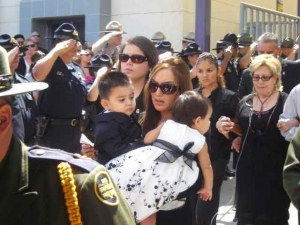 About 4,500 to 5,000 people turned out to pay final respects to Rosas at the funeral, with many seated in an overflow auditorium. Hundreds of law enforcement vehicles with flashing lights formed a caravan. Uniformed Border Patrol agents escorted Rosa’s flag-draped coffin and two-fire engines held an American flag aloft between raised ladders.

“The darkness that fell upon us a week ago is still unbearable,” said Border Patrol Chief David Aguilar, who praised Rosas for making the ultimate sacrifice in the line of duty. At the burial, several attendees required medical attention due to the 105-degree heat.

Rosas is survived by his wife, Rosalie, a two-year old son and an 11-month old daughter (photo). Last Friday, a fundraiser hosted by San Diego Sheriff candidate Jay LaSuer at the Scottish Rite Center in Mission Valley raised over $15,000 to help Rosas’ family. An additional $4,182 has been donated through a website set up to benefit the family at http://officerrobertrosas.chipin.com/officer-robert-rosas-family.

Please consider fixing the headline, I'm sure that's not what you really meant to write.