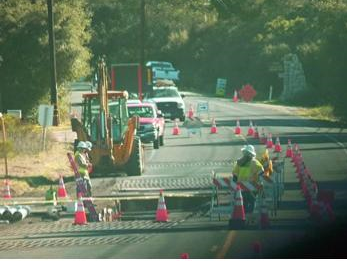 “We ask the Alpine Planning Group to ask the County of San Diego to examine the Alpine children for leukemia once a year as a precaution,” write engineer Robie Faulkner and contractor Michael Milligan, who conducted the study.  Alpine Sun editor Lori Bledsoe indicated that she also walked the boulevard with an EMF meter and found the study’s readings to be correct.

A study by Oxford University and the Institute of Environmental Health in Sweden found exposure to EMFs above .2 and .4 Micro Tesla increased the risk of childhood leukemia. According to the British site Powerwatch, which has links to studies it cites, “There is now general acknowledgement that magnetic fields in excess of about 0.3 to 0.4 microteslas (µT) are linked with a doubling of leukaemia incidence. An increase in incidence is seen from about 0.15 µT, so it is wise to minimise our exposure.”

Not all studies have been conclusive, and the World Health Organization classifies EMFs as “possible carcinogens.”

The local study measured EMFs along Alpine Blvd. before the Powerlink was buried and again after the line was energized.  In addition, measurements were taken in a pickup truck at the same locations on Alpine Blvd. and also along Interstate 8 parallel to the Boulevard.

In every location along the Boulevard, EMF levels were higher after Powerlink was energized and many locations had readings above the .2  danger threshold.

The elementary school site’s levels shot up from .07 before Powerlink to as high as .43 after. The high school site went from .3 to 1.44 in January 2016 measured on foot and an astounding 2.04 measured from the truck along the boulevard.

The highest readings were at the Peutz Valley Road intersection: 2.12 measured from the truck on Alpine Blvd.-- ten times the potential danger level.  Star Valley Road’s readings skyrocketed from .1 to as high as 1.85 on average in January of this year.

By contrast, the readings along Interstate 8, much farther away from the Powerlink, ranged from .03 to. 06 Mcro Tesla, with the exception of slightly higher readings at the Victoria Drive Underpass (.13).  Only the bridge underpass reached .2, the threshold found to dramatically increase childhood cancer risk.

The Alpine Community Planning Group had opposed the project prior to its construction, but their concerns were ignored by most elected officials and the California Public Utilities Commission, which pushed through approval at the direction of then-Governor Arnold Schwarzenegger.  Governor Jerry Brown also backed the project. State Senator Joel Anderson, who paid a fine for exceeding the maximum contributions allowed in 2009 from Sempra Energy, parent company of San Diego Gas & Electric Company, took no position though some concerned constitutents asked him to oppose the line. (Correction: An earlier version of thiis story stated Anderson supported the line, but his office has clarified he did not.)

Supervisor Dianne Jacob has been a vocal opponent of the Powerlink project through East County. ECM has contacted Jacob and SDG&E to ask what can be done to protect the people of Alpine, particularly children, from the high ECM levels measured.

This story has been picked up by at least one national site: