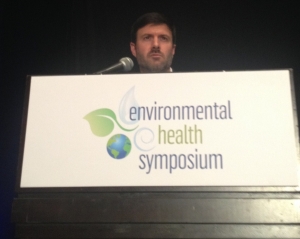 March 9, 2016 (San Diego) - The Environmental Health Symposium (EHS) had a public forum  March 7th where speakers shared information on dangers of Genetically Modified Organisms (GMOs).  Almost 31 million GMO meals are served to kids each day across America. But increasingly, doctors are voicing concerns.  Some report improvements in conditions from Autism to gastrointestinal problems after switching kids to organic foods without GMOs.  Now parents are mobilizing to fight for changes from farms to school lunch programs to dinner tables across America.

One of the speakers, Jeffrey H. Smith, from Institute for Responsible Technology and author of the book Seeds of Deception, said in 1996, there was the beginning of an awareness of the dangers of GMOs. “Now doctors are prescribing non-GMO diets,” he advised.

According to Moms Across America, a GMO is defined as “a plant or meat product that has had its DNA artificially altered at the molecular level in a lab, usually by genes from other plants, animals, viruses or bacteria. Not found in nature and cannot occur naturally.”  A poster by the group  says so far, high-risk foods include alfalfa, canola, corn, cotton, papaya, soy, sugar beets, zucchini/yellow squash, and animal products (milk, meat, eggs, and honey). 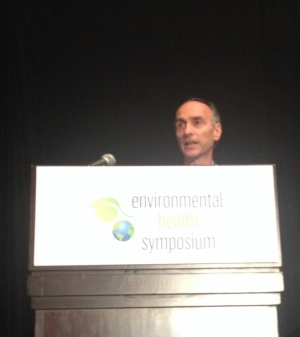 The poster recommends parents meet with director of food services and make their case to go organic, start a school garden, explore companies like Choice Lunch or Revolution Foods, get a group together at the school board and discuss concerns at PTA meetings. At home, you can plant a garden, avoid processed foods, cook from scratch, download the Non-GMO shopping guide and app from the Institute of Responsible Technology, go to a farmer’s market and rancher and buy grass-fed and non-GMO fed meat, and find the best organic foods in their area at http://eatlocalgrown.com/.

Dr. Michelle Perro, a pediatrician from Integrative Pediatrics and Homeopathy, was the first to speak. Lyn Patrick from EHS, who had given the welcome, shared that “Dr Perro has been treating children… She integrates homeopathy and herbs as well as natural medicine… Now she’s seeing the effects of GMOs in patients and dealing with it.”

Some of the effects Dr Perro has seen are stomachaches, neurological effects, and inability to sleep. But she added,“The most difficult to treat are stressed out parents.”

She’s been learning and collecting data of animal GMO studies. To treat kids, she first focuses on the “gut” (stomach). She gives an example of how a child came to see her who had autism. She used her clinical judgment to see if it had to do with the food he was eating. So she took him off gluten and dairy. She then put him on an organic diet, and then he was able to get 50% better. Dr Perro recommends that parents switch to organic and incorporate it in all family members’ diets. Another suggestion is to attend health conferences. She’s been writing a book Toxic Children, so she’s able to reach out to kids all over the U.S.

Next Zen Honeycutt, founder of “Moms Across America, shared her thoughts and gave a PowerPoint presentation. She has two boys, both of whom had autism and allergies. As soon as she switched their diets to organic, they got better. “I’m not an expert scientist. I’m not an expert doctor. I’m an expert mom.” She shared some statistics, including how America is the worst at eating GMOs; the U.S. is last in health. America is also #1 in infant deaths on the first day of life. Half of all U.S. children have chronic illnesses, she added. GMOs have been tested in urine and breast milk among other items.

Glysophate, the key ingredient in the pesticide Roundup, is continuing to be tested in breast milk. She urges the public to test the water they use for glysophate, do a urine test, buy organic, add non-GMO foods, vitamins and minerals, call their Senators and the EPA, and like the Moms Across America Facebook page. If anyone is interested, they can contact Moms Across America for a billboard and be a part of their national health billboard campaign, and host an event on the Moms Across America website. “We can create health and freedom in America,” she concluded.

Patrick then introduced Dr Stephanie Seneff, an MIT researcher who has published two dozen papers since 2011, which are now online. Dr Seneff gave a PowerPoint presentation. She shared how glysophate has been sprayed on food and used in items like tampons and tobacco. 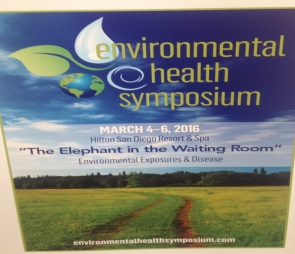 Now one in 45 kids have autism. If GMOs and glysophate is not treated in kids, autism worsens. Bees are also dying from toxicity when crops are sprayed with glysophate. The way to go is organic farming, she believes. “Organic farming produces healthy soil and healthy water. Eat organic, tell your friends, your family, your neighbors, your government, and your farmers”, Dr Seneff told the audience.

In the U.S., products labeled organic are not allowed to have any GMO ingredients.  Since labeling products that do contain GMOs is not allowed by law in our country, the only way to be sure you are not consuming GMO foods is to purchase only organics or grow your own organic foods.

Dr. Gilles-Eric Seralini, a professor at Caen University in France, made his first U.S. appearance at this event. He has produced more than 100 studies. He also gave a PowerPoint presentation. Dr Seralini stated, “We have to change the world pretty fast.”

He noted that the world has seen a decrease in fresh water as there’s been an increase in population. He had showed a picture what has been discovered on baby genes, including motor gas residues, pesticides, and industrial products like tobacco. He recommends getting a urine blood test.. The World Health Organization has taken in account that glysophate is a “probable carcinogen.” 168 countries want GMO labels, and 98% of foods in North and South America have GMOs. Rats have been tested for GMO in food and drinking water, and even the control rats have been contaminated. Cows are also dying from the BT maize (a genetically modified maize). 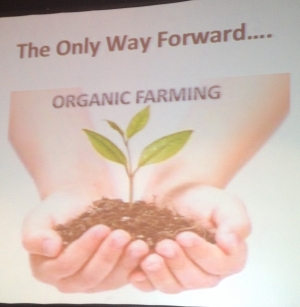 Patrick then invited author and nutritionist, Tom Malterre, to come up. He has a Masters and Bachelors in Nutrition. His PowerPoint talked about “The Currencies of Life.” Because of air pollution, there have been forest fires and drought, he said. Also, NASA has been tracking an atmospheric brown cloud in China/India, which is heading towards the Western U.S. As a result, fish in the waters of Alaska are getting more toxic. He later showed a video that listed  including: 1) $1 billion pounds of GMO have been used. 2) Now 500 million insects are immune to pesticides.

Water with toxins have even ended up in the oceans because of the runoff. “We are changing the environment, that which gives us life,” Malterre stated. He talked about a Swedish family who decided to go on an organic diet for two weeks. The family didn’t want to do it first because in their words, “it costs more than conventional and we are a big family.” As a result of eating organic, their health improved and almost all of the pesticides in their bodies disappeared. Malterre said that the public needs to change who they are, what they think, where they go, and be conscious of what they eat and drink.

Smith presented a PowerPoint. He’s noticed how there’s been repeating patterns on lab animals and humans of disease rates. Once they switch to an organic diet, famers describe their animals as “happier.” There’s also been reported improvement in people. #1 health improvement falls into gastrointestinal (digestive) and # 2 is increased energy. “58% of American say they’re looking for non-GMO foods… Food companies need to respond, Smith said.

He then introduced Alan Lewis, Natural Products Industry Leader and who’s operating 18 stores that sell only organic fruits and veggies. He told the public to first get educated, learn about GMOs and share what they learn with others, and always defend the farmers in their area. He also said to meet up with their neighbors and talk about things that matter.

After people asked questions to the panel of speakers, they each gave a closing statement.

Lewis said, “Don’t wait for someone to save you or us…it’s incredibly rewarding to meet your farmers and go to the farmers markets.”

Honeycutt concluded, “We need to see ourselves as great. Because of my mom, I see people as good. We can make a huge difference. Pick one thing..take steps each day.”

Dr Seralini advised the crowd, “Stand up. Don’t accept lack of transparency supported by the government.”

Dr Seneff told the audience how there’s no science behind the pro-GMO movement. “We need to all become educated. Then we all need to educate others…tell one person at a time. Then they tell one person…we can make a difference.”

Mallere said, “We need to appreciate this event.” He thanked people from the Symposium for putting this event on. Later on, he said to call Senator Mitch McCollum and he gave everyone the Senator’s office number, and he said for everyone to call their own senators.

For more information about any of the speakers, go to their websites. Check out Dr. Seneff at: https://people.csail.mit.edu/seneff/. Visit Dr Perro at: https://www.gmoscience.org/. For Dr Seralini: http://www.criigen.org/. Visit Honeycutt at: http://www.momsacrossamerica.com/.  Visit Malterre: https://wholelifenutrition.net/. For Smith, go to: http://responsibletechnology.org/. Also, check out Smith’s other websites about his movies: http://geneticroulettemovie.com/, and  http://www.secretingredientsmovie.com/.

Get a non-GMO shopping guide: http://www.nongmoshoppingguide.com/.