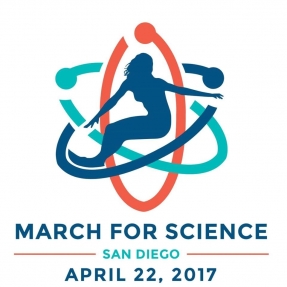 March 27, 2017 (San Diego) – April 22nd in Earth Day. This year, it will also be marked by a March for Science, as scientists nationwide emerge out of the lab and take to the streets from Washington D.C. to here in San Diego.

They’re taking a stand in support of science as the Trump administration guts funding for scientific research and strips facts about climate change off of government websites.  The scientists are rallying public support for investment in science-based facts—not politically driven fake news paid for by the fossil fuel industry.

On its webpage, MarchforScience.com, the group states, “The March for Science demonstrates our passion for science and sounds a call to support and safeguard the scientific community. Recent policy changes have caused heightened worry among scientists. The incredible and immediate outpouring of support has made clear that these concerns are also shared by the support of hundreds of thousands of people around the world.”

The march organizers say that science has been mischaracterized as a partisan issue, enabling lawmakers to reject overwhelming scientific evidence on a matter of critical public interest.  They encourage others in the community to march with them, adding, “It is time for people who support scientific research and evidence-based policies to take a public stand and be counted.

They’re looking to grow awareness of, and support for science at all levels, from local schools to federal agencies and governments around the world.

The San Diego March for Science has its own Facebook page and a website,  MarchforScienceSD.com.  The local marchers will be rallying at the Civic Center downtown (1100 C St.) at 10 a.m. on April 22nd.  The local event will include family-friendly educational information and highlight the importance of scientific research happening right here in San Diego, a national hub for the biotech industry, medical research and green, cleantech research.

The San Diego March for Science even has its own cool-looking logo design:  a hip surfing scientist inside an atom.  But their mission is serious.

“The March for Science champions publicly funded and publicly communicated science as a pillar of human freedom and prosperity. We unite as a diverse, nonpartisan group to call for science that upholds the common good, and for political leaders and policymakers to enact evidence-based policies in the public interest."

I'll be there, handing out leaflets. Leaflets that carry links to my articles in the East County Magazine.