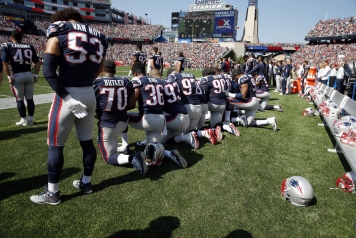 At a rally on Friday night in Alabama, Trump declared that NFL owners should fire players who kneel for the national anthem, referring to the recent trend of players that have been doing so ever since former San Francisco 49ers quarterback Colin Kaepernick knelt for the anthem last year, citing "I am not going to stand up to show pride in a flag for a country that oppresses black people and people of color," as his reason for doing so.

Across the league on Sunday, the NFL's game day, more players protested Trump's comments by kneeling during the national anthem, others joining hands in solidarity. In some cases, owners and even entire teams supported the protests, though others dissented.

Some teams regretted their actions, however.  The Pittsburgh Steelers stayed in the locker room during the anthem of their game at Soldier Field in Chicago, but quarterback Ben Roethlisberger says it was the wrong decision to make.  He wrote on his website on Monday, "I was unable to sleep last night and want to share my thoughts and feelings on our team’s decision to remain in the tunnel for the National Anthem yesterday. The idea was to be unified as a team when so much attention is paid to things dividing our country, but I wish we approached it differently. We did not want to appear divided on the sideline with some standing and some kneeling or sitting.  As a team, it was not a protest of the flag or the Anthem. I personally don’t believe the Anthem is ever the time to make any type of protest. For me, and many others on my team and around the league, it is a tribute to those who commit to serve and protect our country, current and past, especially the ones that made the ultimate sacrifice. I appreciate the unique diversity in my team and throughout the league and completely support the call for social change and the pursuit of true equality. Moving forward, I hope standing for the Anthem shows solidarity as a nation, that we stand united in respect for the people on the front lines protecting our freedom and keeping us safe. God bless those men and women."

Steelers left tackle Alejandro Villanueva, a former Army Ranger, was the only player to go out onto the sideline and stand during the anthem, as was New England Patriots long snapper, Granite Hills High School graduate and El Cajon native Joe Cardona, who is also an active Naval officer.  Villanueva said he regretted his decision at a press conference on Monday. “Unfortunately, I threw my teammates under the bus, unintentionally."  Villanueva did say that it does not matter to him if teammates kneel or sit during the national anthem. “People that are taking a knee are not saying anything negative about the military, they’re not saying anything negative about the flag, they’re just trying to protest the fact that there are some injustices in America."

Not all owners are on Trump's side.  Patriots owner, chairman and CEO Robert Kraft, who is a friend of Trump, released this statement on patriots.com on Sunday:  "I am deeply disappointed by the tone of the comments made by the President on Friday. I am proud to be associated with so many players who make such tremendous contributions in positively impacting our communities. Their efforts, both on and off the field, help bring people together and make our community stronger. There is no greater unifier in this country than sports, and unfortunately, nothing more divisive than politics. I think our political leaders could learn a lot from the lessons of teamwork and the importance of working together toward a common goal. Our players are intelligent, thoughtful and care deeply about our community and I support their right to peacefully affect social change and raise awareness in a manner that they feel is most impactful."

It wasn't just NFL players who were bothered by Trump's comments.  In an Oakland Athletics game on Saturday night in Oakland, Athletics catcher Bruce Maxwell became the first MLB player to kneel during the anthem.  Maxwell, who was born to a military family in Germany, said, "The point of my kneeling is not to disrespect our military, it's not to disrespect our Constitution, it's not to disrespect this country. ... My hand over my heart symbolizes the fact that I am and I'll forever be an American citizen, and I'm more than grateful to be here. But my kneeling is what is getting the attention because I'm kneeling for the people that don't have a voice.  And this goes beyond the black community, and this goes beyond the Hispanic community, because right now we're having an indifference and a racial divide in all types of people. It's being practiced from the highest power that we have in this country, and it's basically saying that it's OK to treat people differently. My kneeling, the way I did it, was to symbolize that I'm kneeling for a cause, but I'm in no way or form disrespecting my country or my flag."

Trump's comments made major waves in another African-American-dominated sports league, the NBA.  The Golden State Warriors, the 2017 NBA Champions and more specifically, MVP point guard Steph Curry, refused Trump's invitation to the White House, a time-honored tradition with championship teams in sports, which prompted Trump to tweet "Going to the White House is considered a great honor for a championship team.Stephen Curry is hesitating,therefore invitation is withdrawn!" on 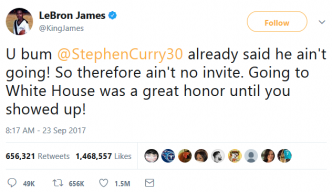 While the NFL players made their protests on the field, the NBA players took to social media and the podium, as today marked the media days for many NBA teams as a new season is set to begin next month.  Cleveland Cavaliers star forward LeBron James tweeted indirectly at Trump "U bum @StephenCurry30 already said he ain't going! So therefore ain't no invite. Going to White House was a great honor until you showed up!"

The only professional sports league not to be affected by Trump's comments is the National Hockey League, where the "put your head down and do as you're told" hockey culture has pressure 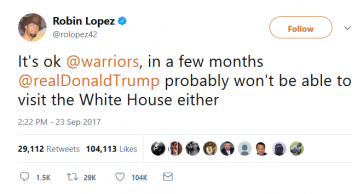 d the Stanley Cup Champion Pittsburgh Penguins to accept Trump's invitation to the White House.  Penguins captain Sidney Crosby, a native of Canada, said “I still feel like we look at it as an opportunity,” Crosby told the Pittsburgh Post-Gazette on Sunday following morning skate at the UPMC Lemieux Sports Complex. “We respect the office of the White House.”

The Penguins released this statement:  "The Pittsburgh Penguins respect the institution of the Office of the President, and the long tradition of championship teams visiting the White House. We attended White House ceremonies after previous championships - touring the historic building and visiting briefly with Presidents George H.W. Bush and Barack Obama - and have accepted an invitation to attend again this year.  Any agreement or disagreement with a president's politics, policies or agenda can be expressed in other ways. However, we very much respect the rights of other individuals and groups to express themselves as they see fit."

The announcements have caused backlash.  On the Reddit subreddit r/hockey, a thread with a link from a satirical newspaper was posted on Monday that reads "Doctors concerned Sidney Crosby has sustained another concussion after he accepts invitation to Trump White House," making light of Crosby's painful history of concussions on the ice.  The thread has now been locked by moderators.

The NHL hasn't been all silent, however.  Tampa Bay Lightning right winger J.T. Brown, who is African-American, received threatening tweets on Twitter on Monday from a user named @johnny17530.

Penguins head coach Mike Sullivan said the team's decision to visit the White House is "politics aside" and league commissioner Gary Bettman in May said players should be "apolitical" on the job and be political "on their own time," again reinforcing the silence that permeates hockey culture.

The only sports league to come out in at least a little bit of support of Trump's comments was NASCAR.  No racers took a knee during the anthem at a race over the weekend at New Hampshire Motor Speedway.  Steve O'Donnell, executive vice president and chief racing development officer of NASCAR, said Monday that NASCAR has always supported the country and the flag, but welcomes other points of view.

"If you look at our history, we’ve always, as a sport, demonstrated a respect for the American flag and the freedoms it represents,” O’Donnell said. “We celebrate the service men and women that have sacrificed to be a part of that.

“From our standpoint, we view ourselves as a sport. We want to continue to celebrate the flag but respect other’s opinions. Going forward, I think that’s where we stand. We hope people can contribute or look at NASCAR as something to tune into on a Sunday and enjoy a sporting event.”

NASCAR also released this statement on Monday:  “Sports are a unifying influence in our society, bringing people of differing backgrounds and beliefs together. Our respect for the national anthem has always been a hallmark of our pre-race events. Thanks to the sacrifices of many, we live in a country of unparalleled freedoms and countless liberties, including the right to peacefully express one’s opinion."
Dale Earnhardt Jr. also tweeted  "All Americans R granted rights 2 peaceful protests.  Those who make peaceful revolution impossible will make violent revolution inevitable-JFK'

But one thing is certain:  Trump aimed to drive a country apart, but instead is bringing athletes across all sports and teams together.  In the words of Warriors head coach Steve Kerr:  "Respectfully, Mr. Trump, the point is this: You’re the president. You represent all of us. Don’t divide us.  Bring us together."

...for an anti Trump story. You are slipping. On the NFL, who cares?

Never was a big fan of the nfl, and fully gave them up years ago due to their taxpayer funded politically correct BS

I was happy to see the voters in San Diego said enough was enough and did not pass another tax to further subsidize billionaire sports owners
We see the loyalty of the welfare king owner as he slithered up to la-la land
This publication has shown San Diego streets are disease ridden, money can be spent benefiting the citizens, not crybaby welfare queens and their cry baby employees
The next step is eliminating the ncaa college football scam as a free minor league for the nfl

And steal a career from thousands of young men, many of whom football is the only way out of their home situation?

nice guy you are.

the nfl can pay for its own minor leagues

the ncaa is corrupt and a waste of taxpayer funds, focus on education not producing illiterate gladiators

funny how the left is fine with ncaa racism and slavery

"THE NCAA IS SLAVERY!!!!" oh hey check it out, my favorite argument from anti-athletics people, right up there with "HIGH SCHOOLS CARE MORE ABOUT FOOTBALL THAN THE ARTS!!!"  This is the best one to enjoy some tea, crumpets and a cigar and read over and over again as you laugh at it.  Because as we all know, college athletes NEVER willingly play a sport.  Noooo, they're always forced by those evil recruiters!!!!!

"Racism!!!!" uh you're aware many NCAA players are your precious white people, correct

>thinking a sports fan has a political alignment

time for a lot of self examination , that is a 100% evil and racist comment

deal with the shame