(View video of the Mayor and Kalasho interaction here: https://www.youtube.com/watch?v=K0i7cHpG_yw&feature=youtu.be)

In a nearly empty City Council chamber, members of the City Council returned to their seats on the dais after a closed session meeting, when Kalasho openly dangled and twirled a white cellphone in his hands as he grinned at his wife, Jessica, seated in the back of the chamber. The action defied a recently enacted ban on use of personal electronic devices during Council meetings. Wells also warned the entire council that cell phones were to be turned off at the beginning of Tuesday’s meeting.

Observing these actions during the last portion of the open meeting, Mayor Wells called twice for Kalasho to stash the device. “Mr. Kalasho would you please put your phone away,” Wells stated. “Would you please put it out of your hands,” adding, “We’re not doing this to hurt you.”

Kalasho retorted, “You absolutely are doing it to hurt me.” When he was quizzed by Wells if there was a significant and urgent reason for him to be on his phone, Kalasho said that it was “because of an emergency.”

Wells fired back, “I have no option but to ask for censure. I’m giving you one more warning…I”ll ask you at the next meeting…if you are oppositional or defiant…I’m going to ask for the City Council to censure you,” to which Kalasho responded, “That’s not how it works.”

Earlier this year, following the lead of other California cities who have taken a “better safe than sorry approach” endorsed by the League of California Cities, the El Cajon City Council voted to ban the use of personal cellphones and other wireless devices by members during Council meetings, citing potential violations of the California Brown Act which guarantees the public's right to attend and participate in meetings of local public legislative bodies with expectations of transparency.

In a digital age, it is believed that emails, text messages, posts online or a casual e-mail conversation between two City Council members or an offhand comment on a newspaper website may quickly and inadvertently turn into a “meeting” under the Brown Act, although a court has yet to make a concrete determination of such a policy. (The League of California Cities on its website describes itself as “an association of California city officials who work together to enhance their knowledge and skills, exchange information, and combine resources so that they may influence policy decisions that affect cities.”)  In addition, state law mandates that during public hearings, elected officials may consider only evidence presented – not outside communications, which could open the door for influence by lobbyists or others.

Kalasho recently filed a complaint with the State of California Department of Fair Employment and Housing claiming discrimination by the City, after the Council voted 4-1 (with Kalasho opposed) to allow no personal electronic devices on the dais during Council meetings, though members can use city-issued Apple iPad tablets configured to only allow access to City of El Cajon official websites and access to the city’s financial budget documents and municipal codes.

Before adjourning Tuesday’s meeting, Wells said that he would seriously consider censuring Kalasho for his misbehavior – an unprecedented move in the history of the City of El Cajon City Council. A “censure” is a public admonishment for misbehavior.

A censure would be unprecedented, though Council did previously vote in January 2013 to condemn criminal actions of Jillian Hanson-Cox,  though only after the former Councilwoman pled guilty to embezzling funds from an employer and had resigned from the Council.

“This is not about me, it’s about his lack of respect for the people of El Cajon,” Wells later told ECM. “Many of us have been concerned about the allegations of his mistreatment of women, fraud, violations of campaign law, fake non-profit organizations, Internet crimes and not to mention the myriad of lawsuits in which he is involved and the lawsuits he’s threatened towards the city. On top of that he is in public feuds with the press. All of these things are an embarrassment to the City and the Council,” Wells added.

Kalasho has openly attacked and threatened to sue San Diego Union-Tribune watchdog reporter Jeff McDonald, and also threatened East County Magazine’s editor, who will be responding in a separate article to legal threats and unfounded claims made by Kalasho after ECM reported on his legal and ethical controversies. Since his initial clashes with the Union-Tribune, Kalasho has refused to respond to requests for interviews or comments to both the Union-Tribune and East County Magazine.

Linda Nickerson, president of the East County Democratic Club, a local political organization which has enthusiastically supported and endorsed Kalasho in the past, did not respond to a request from East County Magazine for an interview.

View the marijuana ordinance by clicking item 3.1 on the agenda here:  http://www.ci.el-cajon.ca.us/Home/ShowDocument?id=14227 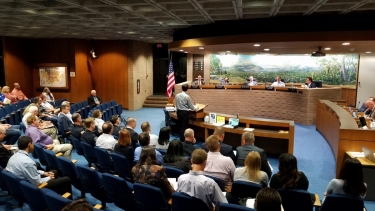 Ten citizens offered public comment earlier in the meeting supporting a City of El Cajon proposed ordinance to severely restrict personal cultivation of marijuana and opening of medical marijuana dispensaries within city limits and impose heavy fines on those violating the rules. There were no public comments against the ordinance.

It was made clear during the discussion that the ordinance adopted by Council is not an attempt to circumvent voter approved California Proposition 64 (Control, Regulate and Tax Adult Use of Marijuana) which legalizes the possession, use, and cultivation of “non-medical” marijuana for those who are 21 years of age or older. The state law provides a state licensing process for commercial marijuana sales, though cities can set certain limits.

The city’s ordinance specifically prohibits personal outdoor growing of marijuana, yet it recognizes indoor residential cultivation of marijuana consistent with state law (up to six plants per household).  However the ordinance clarifies that existing city law also prohibits all commercial marijuana “activity” including sales, commercial cultivation and distribution in the City of El Cajon. The ordinance increases administrative and civil penalties fines up to $2,500 for each violation being charged to the owner of a dispensary and the owner of the building where the dispensary is located. “That is significant teeth,” said Wells.

The City of El Cajon has forced the closure of 31 illegally operating marijuana dispensaries in the past seven years, the most recent being a  dispensary which has been operating for the past two years on the 900 block of W. Main Street operated by Fred Jajou and West Main Street LLC. According to court documents, in a settlement reached with the parties involved, the San Diego County Superior Court has ordered Jajou and the parent organization to pay the city of El Cajon $75,000 in miscellaneous fines and penalties for violating El Cajon’s land use regulations.

Patricia Williams, a former methamphetamine user and a current resident of El Cajon Transitional Living Center said that as a child, she had an easy access to marijuana. “That led to being an intravenous drug user. All of this does not have to be around. We have enough troubles with drugs and alcohol in the city of El Cajon, and I think that it should not be so easily obtainable,” she said.

Resident Jamie Freitas began his testimony by offering his thanks to all those who were involved in the most recent closure of a drug dispensary in El Cajon. “It has been one week that it has been closed and it has been one week not living next to Disneyland,” he said. “No more hundreds of cars all day long, hundreds of people walking near the property all day and night. No more car racing. No more loud music. No more drug paraphernalia on the street,” he continued to say. “But I left you out, Councilman Ben Kalasho. I view you as part of the problem and not part of the solution. What I found out is that you accepted campaign contributions from the owner of that marijuana dispensary that has probably cost the city tens of thousands of dollars to close down and ruined my neighborhood. Depending how you vote might change my mind.”

Freitas then said that the marijuana dispensary in question has moved outside of the El Cajon city limits. “Any member of the City Council who doesn’t vote to pass this new ordinance for higher fines and making it a criminal offense doesn’t have the interests of the people of El Cajon,” he said.

In response, Kalasho said that he believes that citizens should have access to medical marijuana “because it has been proven to treat illnesses and things like that. I’m not for children to be smoking marijuana or people abusing it for recreational purposes. I don’t blame you,” Kalasho added.

Conversation between El Cajon City Attorney Morgan Foley and Kalasho ensued about whether he would be disqualified from voting on the matter because of his receipt of campaign contributions. But because it was a vote on a broad citywide issue rather than a specific issue, Kalasho would be allowed to vote. He ultimately voted with the majority in a unanimous support of the city Planning Commission’s recommendation to adopt the ordinance.

He just needs to have his diaper changed!
Somebody please nip this fellow's political career in the bud before it grows to a more invasive pest! I am embarrassed for having placed my vote and confidence in this pompous parasite (my sincere apologies to the good people of El Cajon for my fault). I want to thank the East County Magazine and San Diego Union Tribune reporters for their excellent work in uncovering what appears to be a clear case of a "Con Man".
Clown Kalasho has fashioned himself as one of the most despised members to ever occupy a seat on the El Cajon City Council and he has done so in record time. This arrogant political neophyte is truly an embarrassment to the city and to those who voted for him. The high level of detestation he invokes has nothing to do with his false claims of discrimination but have everything to do with the highly questionable and arrogant manner he displays. As a candidate for El Cajon City Council in 2012, Kalasho was fined $6,500 for improper campaign finance practices. It was also reported his campaign failed to deposit contributions into a designated campaign bank account, failed to report $10,380 in expenditures and received cash contributions of $100 or more in violation of state rules. San Diego Union Tribune, 10/21/2014 Kalasho apparently fancies himself exempt from rules established by a majority vote of the city council and laws set forth by California state legislators. He is wrong, he is a disgrace, and if this city-wide embarrassment won’t do the right thing and resign a recall referendum is in order.