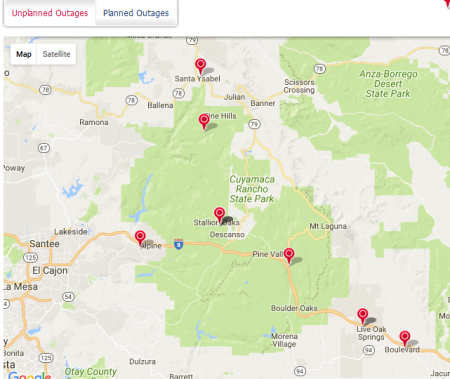 January 28, 2018 (San Diego’s East County) – With a red flag warning in effect due to high fire danger and gusty Santa Ana winds forecast through Monday, San Diego Gas & Electric Company (SDG&E) has once again shut off power to many rural and mountain communities.  An outage map curiously labels these as “unplanned outages” even though clicking on communities shown in the SDG&E outages map reveals a message stating that in most of the current outages, “We’ve shut off the power for safety.”

Power went off last night (Saturday evening) and is not slated for restoration until mid-to-late afternoon on Monday.

The power is presently out in many areas including the East County communitise Boulevard, Live Oak Springs, Descanso, Pine Valley, Alpine, Pine Hills, Santa Ysabel and surrounding communities, affecting thousands of customers. Portions of North County including Valley Center and the Pauma area are also without power.

Many of these areas have had frequent intentional outages since a California Public Utilities Commission ruling late last year prohibited SDG&E from charging ratepayers for wildfires that the state found its lines and equipment caused in 2007.  Those outages caused food spoilage that SDG&E has refused to pay for.  Residents also suffered hardships due to inability to pump electric wells needed to supply water for livestock, households, irrigation and firefighting, among other risks created by prolonged outages.

In Descanso, which had experienced 11 such outages as of mid to late December, the latest outage has sparked angry comments on the Descanso Neighbors forum on Facebook, which some residents can still access via mobile devices.

Bill West posted, “I have never lived in a place in the United States where the power goes out this much. I’ve seen it in a number of undeveloped countries, however.”  He also indicated that PG&E has not shut off power during high winds.

Some posters urged fellow residents to be self reliant. Some have invested in generators or switched to AT&T land lines, which unlike cable phone lines, stay on during outages.

But Claudia D’Spain White posted, “Why do I need to pay SDG&E if I have to be self reliant? How do I prepare for no phone service when the power is down? If there is an emergency in many areas in the backcountry there is no cell service! Electric goes out and landlines don’t work.”

Joe Carroll voiced a life-threatening concern. “I need power for my oxygen machine it does sent have battery back up.”

Karen Noblitt-McIntyre proposed litigation. “I am wondering why do we not all band together and start a class action lawsuit up against them [SDG&E],” she posted on the Pine Valley Facebook forum., accusing the utility of putting “profits ahead of customers.” She proposed that residents contact former San Diego city attorney Mike Aguirre, who has filed previous suits on behalf of ratepayers.

A few defended SDG&E’s actions.  “Thousand of acres (5 separate fires) and many communities were destroyed by wildfires during Santa Ana wind episodes in October, just north of SF (San Francisco),” Julie Proctor posted on the Descanso Neighbors forum. “Maybe if PG&E had cut power, it wouldn’t have been so bad…It’s only out of precaution.”

But White retorted, “How would t be if the utility companies built and maintained their equipment so neither fires caused by lines or outages were necessary. It isn’t like Santa Ana winds are a new thing!”

On the Pine Valley forum on Facebook, Susan Major-King asked of SDG&E, “Isn’t it their responsibility to maintain their lines for any disaster?”

ECM has emailed SDG&E to ask once again whether they have any plan to upgrade lines to withstand higher winds in areas that have had repeated outages, and will publish any response received.

Customers with concerns about frequent outages may wish to contact the California Public Utilities Commission as well as state legislators in areas that have had recurrent outages including State Senator Joel Anderson, Assembly member Randy Voepel and State Senator Ben Hueso.  The latter chairs a committee overseeing utilities in the California Legislature.  You can find contact information for these State Senate and State Assembly officials here.

You can check the status on current outages at www.sdge.com by clicking the outage tab at the top right side of the page.

The more they stay the same. SDG&E will always put profits over customer safety and service.