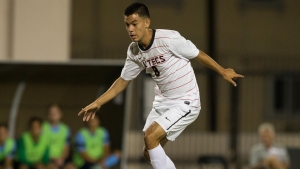 Pablo Pelaez had an assist and the game-winning goal

September 7, 2018 (San Diego) - The Aztec men’s soccer team (1-2-1) secured their first win of the season with a 2-1 victory over LIU Brooklyn (1-3-1) Friday evening at the SDSU Sports Deck. Pablo Pelaez had an assist and a highlight reel game-winning goal in the 70th minute to help the Aztecs overcome a 1-0 deficit.

“This is definitely something we have been searching for and it has taken too long for us to get,” Head Coach Lev Kirshner said after the match. “We are a very good team and it’s nice to get that off our back and start moving forward with more of them. The team was very good tonight in a lot of areas and we got a just result.”

It was a defensive battle for nearly the entirety of the first half. The first shot for either team didn’t come until the 28th minute and neither squad made a credible threat to score until the final minute. With less than a minute remaining until the halftime break, the Aztecs were whistled for a foul in the box to set up a penalty kick for the Blackbirds.

Rasmus Hansen placed the ball inside the right post, while SDSU goalkeeper Cameron Hogg dove the opposite way. This was LIU Brooklyn’s first shot of the first half.

The Aztecs immediately bounced back and scored the equalizer 30 seconds later. Pelaez found a hole in the Blackbirds’ backline and fed a beautiful pass right up the middle to Robby Jacobs, a Clemson transfer, who chipped the ball over the charging goalkeeper.

The Aztecs had struggled in the second half in their first three matches, but this was not the case this evening.

“We talked about [our second half struggles] and obviously getting a goal right before halftime, and right after giving up a goal, it vitalized us,” Kirshner explained. “So we went in [at half] talking about getting on the front foot right off the bat in the second half. We made a couple adjustments with some personnel changes and fortunately it worked.”

Before Pelaez scored the go-ahead goal, the Aztecs had been knocking on the door with three shots and three corners in a five minute stretch. Then in the 70th minute, Pelaez scored what could be the goal of the season.

After a failed clearance by the Blackbird defense, the ball ricocheted to AJ Valenzuela near the top of the box. He sent a touch pass to Pelaez, who controlled the ball and then sent a bending ball with his left foot past the outstretched arms of the Blackbirds’ keeper and into the upper left corner to give SDSU a 2-1 lead in the 70th minute.

“We were tied 1-1 and fighting to get our first win,” Pelaez explained after the match. “Credit to AJ [Valenzuela], we had a little combination at the top of the box and I saw the keeper a little bit off his line so I said, ‘Hey, why not? I’ll give it a go’ and it went in.”

Things only got worse for the Blackbirds in the 78th minute when their goalkeeper, Anthony Sciola, made a dangerous sliding tackle and was issued a red card, forcing a keeper change and for the Blackbirds’ to play a man down the rest of the match.

The Aztecs subbed offense for defense and were never threatened for the rest of the match.

Cameron Hogg (1-2-1) collected one save en route to earning his first win as an Aztec.

“Pablo is playing like he is one of the best in the country right now and has been a very important piece to us and to our attacking end. He has been involved in every one of our goals now. It has been a wonderful start to the season for him and it was a beautiful game for him tonight.” Coach Kirshner

Entering the match, the Aztecs had been outscored 5-0 in the second half. Tonight, however, they scored the lone goal in the second frame and dominated possession, registered six shots to the Blackbirds’ two and had seven corner kicks while LIU Brooklyn had none.

The Aztecs have four goals on the season. Pablo Pelaez has scored three of them and assisted the other.

Three of the six goals the Aztecs have allowed this season have come via penalty kick.

“It was a great performance all around. We needed to bounce back and as a team we did and we are so happy to get this first victory. Hopefully we can get it rolling from here on out.” --Junior midfielder Pablo Pelaez