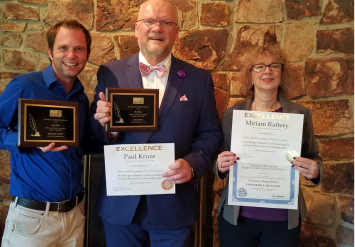 ECM Editor Miriam Raftery and Kruze shared a second place political reporting award for their article, “Kalasho gets slapped: Countersuit against accusers thrown out by San Diego judge.”  The judge found El Cajon Councilman Ben Kalasho’s countersuit to be a SLAPP suit, an illegal action meant to intimidate people from exercising constitutional rights of free speech and seeking redress of grievances in court.

Kalasho has bashed ECM and other media reporting on his legal troubles as “fake news.” Thanks, San Diego Press Club, for affirming the value of our “real news” reporting in the public interest.

Excellent journalism everyone!
Congratulations on being to journalism the exact opposite of what Bessmon Kalasho is to politics.