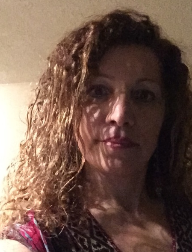 Her journey as a refugee led her to Syria, Kuwait, Jordan and Russia. Now an El Cajon resident, she has worked as a scientist, realtor, poet, and humanitarian.

January 5, 2019 (El Cajon) -- Nital Meshkoor settled in El Cajon in 1998 following her escape from the first Iraq war, a journey that cost her many years of hardship, but her actions in the community have set her apart as a human rights activist and role model for refugees to come.

Meshkoor and her family left Iraq in the early ‘90s to resettle in Kuwait. Despite Meshkoor’s prominent position at the University of Baghdad teaching various scientific and premedical subjects such as microbiology, Meshkoor felt oppressed due to Saddam Hussein and his Ba’athis regime.

She and her husband packed up their belongings and resettled in Kuwait with their young children. Her parents had already paved the way and were living in Kuwait at the time.

Just as soon as Nital and her family begin to unpack and start their establishment in a new country, Hussein and his troops invaded Kuwait. The Meshkoors were faced with the Iraqi army only days after they arrived in Kuwait. (Photo: Iraqi tanks, by U.S. Navy photo by Photographer's Mate 1st Class Michael Larson.)

During this time, they witnessed the looting of neighboring Kuwaiti houses by the Iraqi army. Not knowing which direction to take, the family stayed in their home, watching from the window as Iraqi troops invaded Kuwaiti homes, taking belongings and forcing families to flee.

When the Iraqi troops knocked at their own door, Meshkoor’s husband made an attempt to connect with them, hoping they would respect fellow Iraqis and leave peacefully.

Thankfully, his stint in the Iraqi army combined with his brawn gave him credibility among Iraqi soldiers, who exited the house without their notorious pillaging.

Finally, Nital could not take the invasion of Kuwait so she and her family drove from Kuwait back to Iraq in her brother’s new red Mercedes.

Upon their arrival back home, the minister of economy (who was in charge of the looting at the time) questioned Meshkoor’s possession of the new car, which he found appealing for his agenda.

Despite Meshkoor’s documentation and power of attorney from her brother demonstrating her ownership of the vehicle, the Iraqi official confiscated her car. Meshkoor fought a long and difficult documentation battle with the Iraqi government until finally her hopes came to fruition – Meshkoor received a call to pick up her car and retake ownership.

Shortly after, the first Bush administration raided Iraq. Meshkoor and her friend were hopeful that they would finally be liberated from an oppressive and bullying regime. 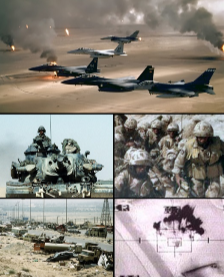 Their only objective was to demoralize the Iraqi government and economy; their labor only served to bomb buildings, bridges, and civilians rather than liberate the people.

Despite the outcome of U.S. occupation in the first Gulf War, Meshkoor said the American soldiers were always friendly.

Finally the Meshkoors were on the road once again. Feeling unsafe in Baghdad, they escaped to northern Kurdistan, but when they thought they had finally reached a safe zone, they once again heard bombs overhead.

After several days of travelling around the country, the family resettled back at their home in Baghdad.

A few years later, the travel ban from the Hussein regime was lifted and Iraqi citizens were able to leave. Meshkoor and her family travelled to Jordan, where they stayed for six months.

They found the people and climate in Jordan to be inhospitable to Iraqi refugees.

“People would throw tomatoes and rocks at us,” Meshkoor recollected, gesticulating a throwing motion. The Sunni Jordanians  had bad opinions of Iraqi Shi’ites due to religious, political, and sectarian differences.

The family stayed in Jordan for six months and then made their way to Russia, where a smuggler promised to take them to Europe. They paid him approximately 9,000 U.S. dollars but the individual absconded with the money and never delivered them to safety.

They were stuck in Russia for approximately nine months, hiding indoors and fearing for their safety because their temporary visa in Russia had expired. The family lived under these conditions until a family connection in Syria allowed them to enter Syria with the requested recommendations according to the process of the Al-Assad government.

Meshkoor and her family felt at-home in Syria. The people were welcoming and hospitable to Iraqis. They were showed respect in Syria during a time when Syria was a fairly stable nation that had accepted other refugees with warmth and hospitality.

Meshkoor and many others from the Middle Eastern community share sentiments of empathy toward the Syrian people currently displaced by war, who always welcomed others with kindness, yet did not receive the same generosity during their own exile.

“The Syrians used to say to us Iraqis, ‘Ala Rasi - you are on our head’,” said Meshkoor, quoting the Arabic expression meaning treating others like crowns.

Meshkoor partnered with a connection to establish a human rights organization, called Iraqi Human Rights Society that worked with other Iraqi refugees to share their stories of hardship and oppression under the Hussein regime. The organization also boasts a chapter in the United States and started a publication in Syria called The Human Voice that utilized journalism as activism to provide a narrative for Iraqi refugees. The Human Voice was published in both English and Arabic.

Despite her initiatives, Meshkoor found it difficult to find a full-time career in Syria. She and her family were also forced to move houses every six months due to Syrian law that allows tenants a type of squatter’s rights to property ownership if they have lived in a home for more than six months.

As a result of this, landlords evict tenants before the six-month mark to avoid relinquishing ownership.

The United States’ politics in the Middle East have wreaked havoc on many lives. While the United States once funded Hussein during the Iraq-Iran conflict with full knowledge of his militant dictatorship, they later turned on him in favor of the Kuwaiti cause. Hussein and the Ba’athis party invaded Kuwait as a result of their previous U.S. support only to find themselves being overthrown for a different purpose. 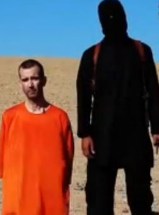 Meanwhile, the U.S. politics in Syria have reflected a similar outcome. The United States began funding rebel groups in 2013, in an attempt to overthrow the Al-Assad regime. This funding led to the outbreak of the Islamic State, a band of rebel groups who acted on behalf a certain politically charged religious agenda that appealed to males from various nations who came together for what became a mass atrocity that spread into neighboring Iraq.

Visit the link below for information on U.S. funding of various groups in Syria who, in turn, fought each other, in addition to prediction of the creation of the Islamic State via U.S. arms initiatives:

“In Syria, militias armed by the Pentagon fight those armed by the CIA” https://www.latimes.com/world/middleeast/la-fg-cia-pentagon-isis-20160327-story.html

Iraq is a now a weak, developing nation laden with various religious, political, and tribal factions and no true common order in place. 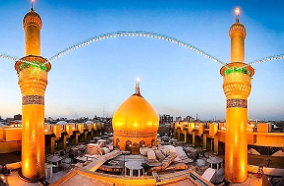 Meshkoor originally hails from the holy city of Najaaf, Iraq (photo, right, Wikimedia) – the Shiite parallel of what Rome is to Catholicism. It also is in Najaaf that Sistani is hailed as the prominent Shiite Grand Ayatollah for Shiite followers around the world.

Sistani has millions of followers and issues a Jihad Fatwa against ISIS.  His message was heard by Iraqis of all religions who banded together to liberate Mosul after his message was spread.

For more information on Sistani, please visit link below.

Meshkoor has only travelled back to northern Kurdistan since her escape, but was advised not to reenter Baghdad with her American passport. Although she is not of Kurdish decent, Meshkoor often found more safety in Kurdistan, both during the First Gulf War, and later when she wanted to return to her homeland.

After years of struggle, the Meshkoors were finally granted permission to enter the United States on a refugee visa. The family came to San Diego to join Nital’s brothers who had settled here in the 1970s.

Meshkoor shares a similar history with many others in San Diego County, specifically El Cajon, which hosts one of the largest numbers of Iraq war refugees in the United States. Despite the traumatic experiences she endured, she is thankful that she and her family were able to arrive safely and resettle in the United States. Many of her fellow neighbors who escaped from Iraq, and later those who escaped more recently from Syria suffered severe traumas and lost their lives in the process due to war casualty, drowning or eaten by sharks while being smuggled across seas, and heart attacks and strokes from the physical and emotional turmoil of escaping a war. 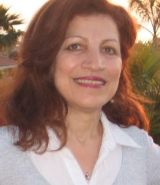 Meshkoor reacquainted herself with human rights work and started a position with Catholic Charities shortly after her arrival. She also did voluntary medical work in her field, assisting other Iraqi immigrants with medical needs. She later changed careers and works as a real estate agent for her own company, San Diego Realty Experts, which is active in El Cajon. (photo, left: Nital Meshkoor in El Cajon)

Aside from her humanitarian work, Meshkoor’s educational background is quite impressive – She obtained a Bachelor’s of Veterinary Medicine and Surgery from the University of Baghdad, and later a Master Degree in Clinical Immunology from Brunel University in West London. Her career in science led her in many different directions, but assisted her in her community service initiatives in healthcare with refugee communities.

Nital also holds a voluntary position as the Vice President of the Iraqi Association of Culture and Arts in San Diego, and has recently served as a liaison in East County Media.

Nital is currently a published poet. Her book was recently released and she hopes to continue a signing tour. The book is a rich text of Arabic poems; the title translates as Dancing on the Edges of Poetry. For inquiries on the book, contact nithalh@gmail.com.

Do you want to see more articles on people making a positive difference in our communities and on issues that matter?

Nital's story is an inspiration, she is an example of courage and determination. I'm a California native. It is so easy to take this life for granted. Bravo! I'm glad you and your family survived the journey!
A great read, quite an eye opener and a real human story depicting the struggles of people caught in turmoil through no fault of their own. Nital is an unstoppable force!