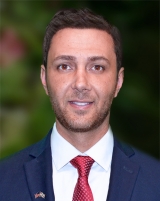 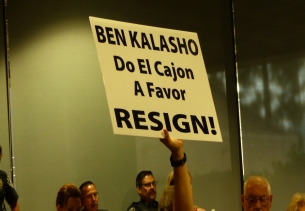 Kalasho’s letter states in part, “Although my time on the council has been educational, I felt I was constantly battling my colleagues on agenda items and the general direction that my colleagues wanted for the city.”  He adds that agenda items he brought forward did not have supporting votes and he did not feel that he could be effective.

Kalasho has also been embroiled in many legal and ethical controversies. As legal strains mounted, Kalasho and his wife, Jessica,arrived separately at recent legal proceedings  and did not sit togther.

Kalasho's political views have shifted.Elected as a Democrat, he abandoned the Democratic Party after calls for his resignation began to arise among some in the party circle. He announced he had joined the Federalist party, a conservative political party that doesn't exist in California, so he was listed as no party preference by the county Registrar of Voters. 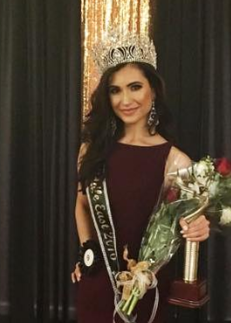 Kalasho's resignation letter also  announced a legal settlement in one of the most contentious cases—but his legal woes may not be over.

A civil suit filed by contestants in the Miss Middle East Beauty Pageant run by Kalasho and his wife, Jessica, alleged fraud and defamation.

After the Kalashos failed to respond to serious allegations, Judge Timothy Taylor deemed materials true and admissible as facts. Those materials  indicated that the Kalashos posted fake nude photos of a pageant winner with whom they had a contract dispute, that Ben Kalasho sexually harassed pageant contestants and offered ton contestant the crown in trade for sex, and that the Kalashos took out dozens of phony IDs on Facebook to defame a taco shop owner, including posting a faked poll finding the eatery the worst Mexican food in El Cajon.

According to Kalasho’s resignation letter, “I am pleased to announce that my wife and I have resolved the legal matter involving Zhala Tawfiq (photo, right), Paris Kargar and Tres Taqueria,” the plaintiffs in the above suit.  He added, “I wish all parties the best moving forward.”

Jimmie Davis Parker, attorney for those plaintiffs, confirmed, “The matter has been resolved to our satisfaction and the resolution is confidential.”

However, Kalasho has not settled a separate defamation case filed by attorney Lina Charry, according to attorney Jennifer Hasso.

Charry won an earlier fraud case against Kalasho, for which he paid $10,000 for misrepresentations made regarding damage to Charry’s property from a car that veered out of control at a car wash Kalasho owned.

In her current suit, Charry alleges that the Kalashos took revenge on her by using social media to create a rigged poll voting Charry “worst attorney in San Diego.” She also claims the Kalashos used fake profiles to make false claims that she performed sex acts in public, failed exams and was promiscuous. Further, she accuses Kalasho of fraudulent business practices by posting false information online  to harm her business, her personal reputation, and cause her emotional distress.

Judge Timothy Taylor, who later recused himself off the case, found all of those allegations by Charry “deemed true” and admissible as evidence, as ECM reported.

Councilman Gary Kendrick defeated Kalasho in November in a bitter election contest for a newly created first district as the city transitions away from at-large elections. Despite a crushing 85-15% win by Kendrick, Kalasho remained on the City Council in an at large seat but would have been forced out in 2020.

Kendrick and his son filed police reports alleging that Kalasho stalked and intimidated them on the campaign trail. Despite that animosity, Kendrick told ECM tonight, “I wish Mr. Kalasho best wishes in his future endeavors."

In recent weeks, Kalasho's demeanor has been notably less combative, since voters weighed in. So his resignation caught other Councilmembers by surprise.

Kalasho filed a discrimination and harassment complaint against the city, which was rejected by the state.  He settled a lawsuit filed by activist Mark Lane , who asserted his First Amendment rights were violated when Kalasho blocked him on social media accounts on which he discussed civic business.  Kalasho later deleted his Facebook and Twitter accounts. A Chaldean chamber of Commerce run by the Kalashos had to change its name due to trademark infringement. The new Chamber’s nonprofit status was revoked by the state after an ECM investigation revealed that the Kalashos failed to obtain a federal tax ID number.

The disgraced Councilman also failed to disclose his criminal record when he ran for office. An ECM special investigation found that Ben Kalasho, whose real name is Bessmon Kalasho, pleaded guilty to two misdemeanor counts of workers' compensation fraud and was still on probation for those crimes when he ran for City Council.

Mayor Wells did offer one conciliatory remark toward Kalasho. “I do applaud him for making the right decision and moving on,” he said. “I think it’s time for the Council and the city to heal and move on.”

How will Kalasho’s seat be filled?

With nearly two years remaining in Kalasho’s four-year term, Mayor Wells told ECM, “My hunch is that we would appoint.  A special election is just too expensive.”

Wells said there are two schools of thought, geographically speaking.  A key question is whether or not the Council will elect someone from one of the two newly created districts slated for elections in 2020, which could give an appointee experience an advantage if they seek reelection, or appoint someone from another district who could not run again.

“It really depends on who applies and what the options are,” Wells said.

In the past, Council has traditionally filled vacancies by appointing members of the city’s planning commission – and in recent memory, all have been Republicans.

One prospect is Planning Commissioner Phil Ortiz, who was surprised to hear of Kalasho’s resignation but said he would “seriously consider” applying to fill the vacancy.

Another potential appointee could be former Councilwoman Star Bales, who was appointed in 2014 to fill a vacancy left by the resignation and conviction of Councilwoman Jillian Hanson Cox. Bales lost her bid for election in 2016, when Kalasho won his seat, but she was respected by fellow Councilmembers.

Estela de los Rios, a housing rights and Latino rights advocate, told ECM, "I believe his resignation is a good step in the right direction for the City of El Cajon. I am very adament to have a transparent, democratic process, no appointment! Factors considered should be a district seat." De los Rios said she will be running for the office.

The officially nopartisan Council currently has no women members, nor any minorities, Democratic or progressive voices despite the city's majority Democratic registration.

James Elia is founder of a progressive Democratic club in East County and a former Assembly candidate. Like Kalasho, he is an Iraqi Chaldean but he has been sharply critical of Kalasho.

Elia says “influence and capability” should be the biggest factors to consider in filling the vacancy. But he adds, “Promoting from the planning board continues this reputation of El Cajon being a `good old boys club.’  Why not a person of color? A Latino?  A Chaldean?”

He noted that while technically the Council can appoint at large, "it makes sense to appoint someone in one of the open districts. The people voted for it so why delay their will? The criteria should be fair and unbiased most importantly not partisian. which I believe they will do."

On Facebook, Elia posted tonight, “Now that disgraced former Councilman Ben Kalasho has stepped down, I am letting everyone know I will be applying to fill the vacancy. I have, for quite some time, had a great working relationship with the current council and I think we can get a lot done together.”

Am I the only one to see the remarkable resemblance that exist between Kalasho and "Dunkin" Donuts Hunter? Do all Republicans emerge from the same mold?
Just FYI he was a Democrat when he ran for office. However, it should not matter.

a conservative group, but when the Registrar advised him it doesn't exist in CA he wound up listed as no party preference.

Finally this embarrassment to the city, to the council, to the Chaldean community, to his family and to himself has done something right. He won't be missed.
About time Ben Kalasho went away, his behavior was getting very strange to say the least. Now for a replacement. Hopefully we get much needed diversity. All council members (and a mayor) of one party affiliation (republican) is not a good idea. Diversity is paramount to democracy. We need someone with fresh ideas, and who will actually listen to the constituents of El Cajon instead of turning a deaf ear to their concerns and complaints about what goes on here. Are you listening Mr. Mayor?
Dear Bye Bye,,, you are 100 percent correct. There are several minorities that should be represented. Unfortunately, you are right on when it comes to the "good old boys network". They have already assigned Phil as their new minion. Others shall apply but will be only given lip service. The large donors that also supported the former disgraced Mayor (Mr Mark Lewis), have already decided on Phil. They will pretend and say what they say, but the fix is in for this underqualified person.
Wishful thinking, will never happen. The good old boys network will give it to one from my mega church.
Good points Bye Bye! According to the latest census there are 29 percent Hispanics in a city with a hispanic name. Thousands of middle easterners. El Cajon is a real multi cultural block. It would be nice to have an El Cajon Native and someone who can speak English and another language. It may already be decided.