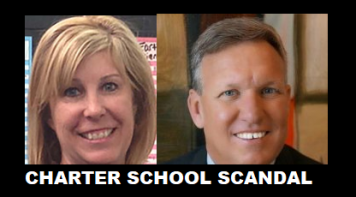 The ringleaders, Sean McManus and Jason Schrock, CEO and president of A3 Education, sought out small school district with limited oversight experience and proposed that they authorize online charter schools to earn oversight fees paid for through public funds, according to the 253-page indictment handed down by a grand jury investigation May 17th after a year-long investigation that involved interviewing over 70 witnesses.

Van Zant is accused of creating EdCBO to provide back office services for A3 Charter Schools, hiding his involvement by filing corporate paperwork under a subordinate’s name. Van Zant previously pled guilty three years ago to conflict of interests involving his company profiting off consulting services for charter schools that he set up and provided oversight for through the Mountain Empire District. East County Magazine was the first media outlet to raise questions about the propriety of Van Zant and Mountain Empire providing oversight to schools in high-performing districts at a time when the state had shut down a school in Mountain Empire for failing state educational standards.

Hauer is charged with misappropriating public funds by overbilling for oversight provided by the Dehesa Elementary School District. The district had oversight of three A3 Charter schools and six other charter schools.  According to the District Attorney, Hauser billed the cahrter schools over $2 million in oversight fees during the 2017-18 school year—far more than the actual costs incurred by the district—and more than the district’s entire budget for payroll. These fees increased as enrollment in the charters rose. The D..A. notes that this symbiotic relationship “discouraged Dehesa from performing oversight that may have uncovered McManus and Schrock’s criminal enterprise.”

Van Zant is charged with five counts including conspiracy to steal public funds and could face up to six years in prison if convicted. Hauer faces up to four years behind bars if convicted on one count.

McManus, an Australian citizen who remains at large, and Schrock are accused of directing co-defendants and others to open 18 online charter schools including Valiant Academy San Diego and other charter schools across California, diverting taxpayer dollars into their own pockets through multiple fraudulent schemes.

Those included paying athletic groups for names of young athletes,then charging small  fees as low as $25 to `enroll’ students into a charter school over the summer as regular students, in some cases with the parent or child being aware of the enrollment.  Operators collected about $2,000 per student from the state.

In other schemes, McManus directed co-defendants or their employees to backdate student records to collect more average daily attendance, or ADA, money. Some private school students were double-enrolled in the online charters to scam more public funds, and the organization even transferred some students on paper from school to school without parental knowledge to reap more than one ADA payment per student.

McManus and Schrock transferred funds to A3 Education, A3 Consulting, Global Consulting Services and Mad Dog Marketing, which they owned or controlled.

According to the D.A., McManus and Schock did not use public funds to educate students, but instead “spent the funds on themselves and their families” as well as investing in real estate and start-up companies.

Two Valiant schools are set to close permanently June 30th following the indictments, the Los Angeles Times reports. Valiant Academy of Southern California, overseen by Dehesa, had the lowest scores on the state’s math and English testing in comparison to schools in nearby counties, the Times reports.

The Times quotes this statement from Dehesa Board President Cynthia White: “The Dehesa School District is not in a position to comment on the substance of this matter, as the nature of the criminal charges against Superintendent Hauer have not been made public. The Board was stunned to learn about the charges, and we have engaged legal counsel to review this matter and any possible implications for district operations.”

The indictments will likely add fuel to efforts to pass Assembly Bill 1506 in Sacramento that would put a moratorium on expansion of charter schools and impose more transparency and oversight on existing ones.

Yes it seems to me a conflict of interest because SDUSD is facing continued lower enrollment due to charter schools and has continued to keep approving/allowing more to compete with the public schools the board and supervisor are charged to manage and support. Yet the individual school support and teacher support has continued to dwindle drastically!
Am I seeing a conflict when the San Diego Unified School District is part of that task force organized by Newsom? I am a home school and charter school advocate because of the long trail of poor results from public schools and San Diego Unified.