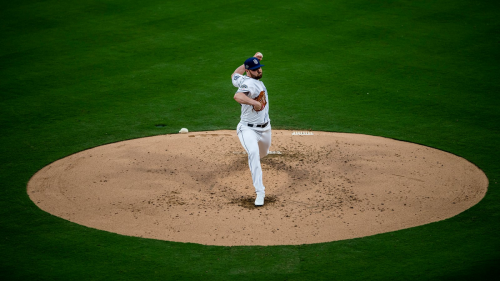 June 18, 2019 (San Diego) - Back home and back in fourth place, the Padres are back to NL Central opponents, taking on the Brewers.  They won 2-0 last night--their fourth shutout of the season--and called up prospect Logan Allen to start game two tonight against Milwaukee’s Brandon Woodruff.

It was scoreless until the fifth when Eric Hosmer lined a pitch to Mike Moustakas, who made the catch, but his throw to first was offbase, allowing Allen to score.  Manny Machado added more with a ground rule double that scored Valhalla alum Greg Garcia and the Padres took a 2-0 lead after five.

Francisco Mejia added more in the sixth with his first home run of the season, a two-run blast to The Beach to put the Padres up 4-0 after six.

Jesus Aguilar put the Brewers on the board in the eighth by scoring a wild pitch, but the Padres took the game and the series with a 4-1 win.

The series finale is a matinee tomorrow at 12:40 p.m.  Zach Davies starts for the Brewers against Matt Strahm.