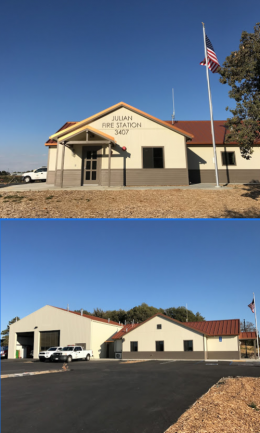 But the LAFCO action and vote failed to take into account potential land claims by the Kumeyaay-Diegueno Indian Land Trust (KDLC), as ECM reported last year, a claim which the Trust now asks a court to enforce.

In May 2018, John “Eagle Spear” Elliott of the KDLC brought to the attention of County Supervisors during a hearing that late Julian resident Frances H. Mosler had deeded 6.4 acres of land to the Native American Land Conservancy (NALC) of Indio, CA — acreage later transferred to the Kumeyaay group. The transfer was reportedly meant to allow a fire station run by the JCFPD to be built on

But Elliott said, “By dissolving itself as a district, the property where the fire station was eventually constructed automatically reverts to KDLC for its use consistent with the underlying deed.”

Although Elliott said KDLC wasn’t taking sides after the Julian-Cuyamaca Fire Protection District earlier decision to dissolve the district, he said the conservancy was never approached by the County, LAFCO, or the JCFPD regarding issues surrounding the deed.

At that time, Supervisor Dianne Jacob said, “That definitely will be an issue that the staff will need to look into and work with you on.”

Alex Bell, county spokesperson, issued an email stating,“We are very early in the LAFCO consolidation process, which is when issues including property ownership are negotiated.”

That was then. One year later, this is now.

The letter sent to the county on Wednesday from Griswold says that the NALC has invoked its power of termination to end JCFPD’s estate “with respect to Property due to JCFPD’s abandonment of the Property. JCFPD no longer has any legal claim, right, or interest in the Property.”

The letter from Griswold continues to say that “NALC hereby notifies SDCFA of its unlawful possession of the Property, which is lawfully owned by NALC. SDCFA as the owner of the Property in fee simple, including all costs associates with enforcing these rights.”

But the County of San Diego has its own ideas and intentions and has asserted that it is ready to challenge the KDLC full-on.

(May 31 was the date when San Diego Superior Court Randa Trapp ordered the volunteers who had been occupying Fire Station No. 56 since April 8 to leave the premises. The volunteers argue that the election was illegal due to violations of the state’s open government law, the Brown Act, which they believe should nullify the election. The JCFPD’s attorney, Cory Briggs, immediately filed an appeal to the San Diego Superior Court’s Appellate Division. Despite the automatic stay of Trapp’s order, which should have allowed the volunteers to remain in the station until their appeal was heard, the following day, June 1, the San Diego County Fire Authority along with the San Diego County Sheriff took over the building, changed the locks and took all of the keys of JCFPD’s fire vehicles. (ECM is continuing to investigate the name of the individual who actually ordered the June 1 takeover action.)

The letter sent this week from Heinlein on behalf of the County states, “As you are aware, SDCFA and JCFPD are currently engaged in litigation regarding which of these entities has the legal right to provide fire protection services to Julian and the surrounding areas.”

It continues, “A Temporary Restraining Order now in effect prevents JCFPD from using the fire station. That Order has been appealed by JCFPD. Nevertheless, the fire station is manned by SDFCA personnel on a daily basis, and, once the litigation is resolved, the fire station will resume providing fire service to Julian and the surrounding areas. In short, the fire station has not been “permanently abandoned,” and SDCFA is not in unlawful possession of the property as asserted in your letter.”

The letter ends, “Should your client file a lawsuit, SDCFA will appear and vigorously assert its legal right to own and possess the property and continue its use as a fire station.”

Honestly here: with there being an existing Calfire station in Julian already, I am actually very interested in what the Kumeyaay people might do with their own land. It is always a happy day when our first nations people get some of their land back! A park, cultural center or interpretative area? A lodge for their private use? Homes? A school or college? The Fire Station Casino? A nature preserve? All could be very welcome, I feel.
The plot thickens...