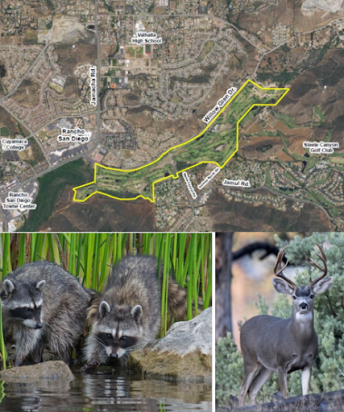 Photos: Map of proposed project; wildlife photos by Debbie Ekhaml, including raccoons in adjacent Sweetwater National Wildlife Refuge and mule deer in Jamul ecological preserve are among wildlife species that could be negatively impacted

July 13, 2019 (Rancho San Diego) – Significant concerns raised by the community over the proposal for a 10-year sand mining operation at Cottonwood Golf Course have been confirmed with the release of the County of San Diego’s Scoping Letter on the project.

A “Scoping Letter” provides a development applicant the list of reports, studies and other documents needed to be considered for approval. In the case of the Major Use Permit sought by New West Investment for a sand mining operation at the Cottonwood site, the detailed list of County requirements underscores the same concerns expressed by the community’s Stop Cottonwood Sand Mine Committee regarding a long-term mine along the Sweetwater River, most notably in the middle of an established residential neighborhood surrounded by homes, schools and businesses.

Those concerns, detailed at www.stopcottonwoodsandmine.org, include traffic, safety and noise, health hazards, impacts on the environment, and decreased property values.

ECM sent an email to EnviroMINE spokesman Jon Cloud for his reaction to the Scoping Letter but did not receive a response. The developer has previously contended that the sand mine  is needed to meet local needs for sand used in road construction and other projects.

The 115-page Scoping Letter provides additional details on the approval requirements, including the need to address impacts involving noise, air quality, altered hyrdrological conditions, and overall “significant impacts on the environment.” The County estimates approximately $750,000 to $950,000 in fees and deposits to process the project to a hearing date, currently anticipated for the latter part of 2021.

Members of the Stop Cottonwood Committee said they were pleased with the County’s detailed and thorough work provided in the Scoping Letter, yet were cautious in their reaction. “

The County has reiterated our significant concerns over the impact to the community,” said Stop Cottonwood Sand Mine Committee Chair Elizabeth Urquhart. “Yet, although the developer has much work to do, we need our neighbors to understand we cannot sit still as we continue to build our opposition. We ask residents to inform their friends and neighbors to sign up at our website. This is a long process and much more work is to be done to inform the community and to ultimately stop this sand mine.”

The Committee continues to seek those who can assist with expertise in any of the areas noted among the Major Project Issues listed above, and/or in the areas of Land Use, Noise, Traffic and Traffic Safety, Air and Water Quality, Archaeological and Cultural Resources, and Biological Resources. Please contact the Committee at info@stopcottonwoodsandmine.com.

The Committee is planning a community meeting for the Fall to keep area residents informed of the process and how to be involved.

The Cottonwood sand mine is proposed by New West Investment and investor Michael Schlesinger, who purchased Cottonwood Golf Course in 2015, four years after the golf course filed for Chapter 11 bankruptcy. The proposal is to mine 4.7 million cubic yards with approximately 3.8 million cubic yards (5.7 million tons) of construction aggregate produced over ten years, in three phases with reclamation planned after each phase. The project application was filed in November 2018.

The Stop Cottonwood Sand Mine Committee held a community meeting in late November 2018, attended by over 200 residents, and within three weeks submitted over 2,100 petition signatures and 70 additional comments to the County of San Diego from area residents opposed to the plan.

County staff also reported over 130 emails or letters received directly from residents. Several hundred have also signed up on the group’s website to receive ongoing communications about actions they can take to reject plans for the sand mine.

The County Scoping Letter referenced above was finalized on May 31, 2019.

See East County Magazine’s prior coverage of this issue:

With my mountain of letters, paperwork and participation regarding the El Monte Valley sand mining project that has formerly been in the news, I am not surprised that the same entity EnviroMINE is involved and pushing the current Cottonwood project. That is their professional business function, promoting sand mining as they did here in our valley and other places. What I am surprised at, is the lack of a tie between the Cottonwood and El Monte Valley proposed projects and why the former seems completely separate and out of view during this Cottonwood fiasco, with the exception of EnviroMine. I have asked the Cottonwood anti sand mining website as to who they are, did they have any relationship or participation in our valley resistance and why they apparently do not use the former project as complimentary to their current resistance. Clarification would be appreciated.