East County News Service
February 26, 2020 (Sacramento) - State Senator Brian Jones (R-Santee) announced today he introduced Senate Bill 878 (fact sheet).  SB 878 will require all boards and bureaus within the Department of Consumer Affairs to prominently display on their websites the current average timeframe for processing initial and renewal license applications.
The Department of Consumers Affairs (DCA) administers more than 3.9 million licenses in more than 280 license types including certificates, registrations and permits, from architects to accountants, dentists to veterinarians, according to the DCA website. 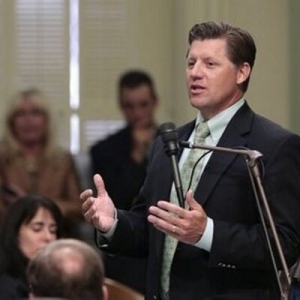 Photo: @SenBrianJones (twitter)
Back in 2009, the department authorized an online licensing system known as BreEZe to streamlining the system. But 11 years and over $130 million later, licensees are still facing long timeframes for some licenses even with the BreEZe system, Jones indicates.
"California has an overregulated licensing scheme that does not work efficiently. SB 878 makes the process to get licensed under DCA a little bit easier,” Senator Jones says. "The Department of Consumer Affairs has failed to update their ancient processing system, while hard-working Californians pay the price of unknown processing timeframes. These licensees need answers and transparency about their application status, so they can practice their profession and businesses can open their doors without unnecessary delays.”
SB 878 has been referred to the Senate Committee on Business, Professions, and Economic Development.

The Department of Consumer Affairs has been working since 2009 on replacing multiple antiquated standalone IT systems. When originally authorized, BreEZe was projected to cost approximately $28 million and scheduled to be fully operational by June 2014. The project plan called for BreEZe to be implemented in three releases. Release 1 went live in October 2014, Release 2 went live in January 2016, and Release 3 was removed from the project entirely. Release 3 included 17 licensing entities. For the boards and bureaus not on BreEZe, a cost-benefit analysis is being conducted for each entity to determine whether each board or bureau should transition to BreEZe or if another information technology platform is a better solution to meet the board or bureau’s business and technology needs. These problems are outlined in the LAO’s 2017-2018 Budget Report and the LAOs 2019-2020 Budget Report: https://lao.ca.gov/Publications/Report/3570 and https://lao.ca.gov/Publications/Report/3937

The Department of Consumer Affairs submitted budget change proposals and is requesting $11.5 million, special fund, in fiscal year 2020-21, $10.6 million in 2021-22, and $7.9 million in 2022-23 and ongoing for the continued support of BreEZe Maintenance & Operations. In addition, the department is also requesting for the business modernization project one-time funding of $5,231,000 in 2020-21 to fund system integration, credit card services, software licensing, project management, project oversight costs, and staffing for project activities. These numbers can be found in the attached budget change proposal submitted by DCA to the Department of Finance.

Finally, a report from the California State Auditor also highlights the problem. Specifically, the second bullet point on the factsheet states: “The estimated costs for the BreEZe project have drastically outpaced initial projections and its anticipated use has decreased—in 2009 the project was estimated to cost about $28 million while current estimates are closer to $96 million, and implementation will include only half of the regulatory entities that originally planned to use it.”

The bottom line is DCA is significantly over its original budget estimate and costs continue to rise. In fact, Release 3 boards have already paid BreEZe related costs, yet they are not using the system.

SB 878 simply requires all boards and bureaus in DCA to post the average timeframe for processing initial and renewal applications. DCA has failed to implement BreEZe across all boards and bureaus, and now DCA is determining if implementing the system is the best solution. While DCA figures all of this out, SB 878 aims to ease burdens in the meantime.