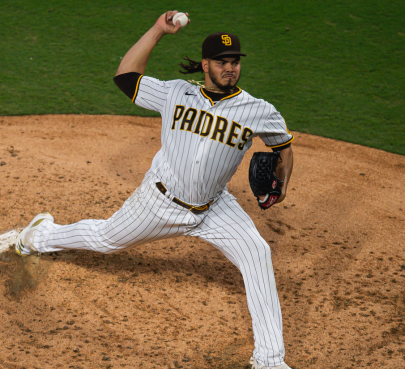 As of yesterday, the Padres have clinched their first postseason berth since 2006

Photo: Dinelson Lamet struck out 11 Dodgers. Via @padres on Twitter

September 14, 2020 (San Diego) - After an odd series against the Giants that had some COVID postponements, the Padres hoped this series with the Dodgers would go swimmingly.  Clayton Kershaw started game one for the Dodgers tonight against Dinelson Lamet.

The Dodgers struck first in the third on a sac groundout by Cory Seager that scored Austin Barnes and LA took a 1-0 lead after three.

Thankfully, the Padres tied it in the sixth with Trent Grisham’s leadoff solo home run--his ninth of the year--to right and we were knotted up at one after six.

They took the lead in the seventh with a long RBI double to left from Jorge Ona that scored Wil Myers, allowing the Padres to take the lead.  And, thanks to Max Muncy’s horrible decision to throw home on Valhalla alum Greg Garcia’s fielder’s choice, Jurickson Profar was ruled safe.  Another screw-up by Muncy--an overthrown ball on what should have been an inning-ending double play--on Grisham’s fielder’s choice allowed Ona to score and kick Pedro Baez out of the game.  Though if you asked us, Muncy’s the one who should have been taken out.  Proof of this came after Blake Treinen came in and gave up an RBI grounder single to right to Manny Machado.  Garcia scored.  Austin Nola hit a grounder that, instead of getting the double play ball like a normal baseball team, the Dodgers were more concerned about getting a runner trying for third.  As a result, Grisham scored and the Padres ended a monster seventh inning up 6-1.

Myers capped it off in the eighth with his 13th home run of the season--a solo blast to right--and the Padres took a 7-1 lead after eight.

The Dodgers tried to rally on Chris Taylor’s piercing RBI single that scored Muncy (hey, he did something right!), but the Padres took game one in commanding fashion with a 7-2 win. They remain in second with a 32-17 win.

The San Diego area is a small market for ticket sales and major endorsements. Coach Tingler has done a great job putting a team on the field that can win games.