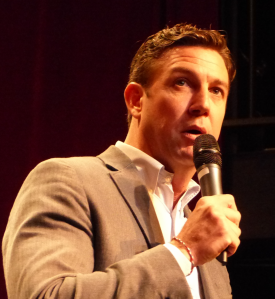 Hunter, a staunch Trump supporter and Republican from Alpine, pleaded guilty in late 2019 to conspiracy to diverting a quarter million dollars in campaign funds for personal use, but his sentencing was delayed due to COVID-19 in La Tuna, the federal  penitentiary near El Paso. He resigned soon after, forcing constituents to be without representation for a full year that proved to be tumultous amid the COVID-19 pandemic.

Congressman-elect Darrell Issa, a Republican who won election in November to fill the seat vacated by Hunter, praised the action. He tweeted, “I'm pleased that all of the Hunter family can spend this Christmas together with a fresh outlook on life.”

But many others voiced outrage - even California Republican Party Chairman Ron Nehring, who tweeted of the Congressional pardons, "Put me down as opposed to all of these. Especially Hunter, who was my Congressman. Our elected officials should be held to a higher, not lower, standard than the average citizen, who would never have been pardoned for similar crimes."

But Carl DeMaio, a conservative radio host and Republican who also ran for Hunter's seat in the primary, denounced the pardon. On Twitter, DeMaio said the pardon "sends absolutely te wrong message that politicians can break the law but can easily avoid any punishment when they do so.  Politicians should be held accountable for following the laws that all of us citizens have to follow--no exceptions.  Today's decision will simply reinforce the clear impression that ordinary citizens have that the Washington DC Swamp Creatures protect themselves, receive special exemptions, and enjoy double standards.

Democrat Ammar Campa-Najjar, who ran against Hunter in 2018 and against Issa for the vacant seat in November 2020, also condemned the pardon, tweeting, “That Donald Trump would pardon the lawless, reckless and shameful actions of Duncan Hunter is both disappointing and predictable. Hunter stole form his supporters, blamed his wife, left an entire district without representation for a year, and launched the most xenophobic attack in modern politics.” He said the pardon sets a “dangerous example,” adding,”Trump’s disregard for the law is absolute. President-Elect Joe Biden’s swearing-in cannot come soon enough; we need his leadership to restore the soul of America now more than ever.”

Hunter’s wife, Margaret recently filed for divorce against her ex-husband, who initially blamed her for the campaign finance violations even though some of the misspent funds included trysts with Hunter’s mistresses, according to federal prosecutors.  Margaret Hunter also pleaded guilty but received probation.

Two other corrupt former members of Congress, Chris Collins of New York and Steve Stockman of Texas, also got pardons. The other two are currently serving prison sentences.  Stockman was convicted of money laundering and fraud;  Collins pled guilty to conspiring to commit securities fraud and lying to the F.B.I.

In addition, the President pardoned four Blackwater security guards convicted of instigating a massacre and killing innocent Iraqi civilians – men the U.S. Justice Department had aggressively prosecuted for their crimes. All were serving lengthy prison terms.

These were among at least 15 pardons listed today. The president previously pardoned 28 others, largely cronies and supporters, including former National Security advisor Michael Flynn, who pled guilty to lying to authorities during the Special Counsel investigation of the Trump campaign.

Barack Obama granted clemency to over 1900 people during his two terms. Some very questionable. Trump is at around 90 people as of today. But the media won't tell you that story. They'll pearl clutch and make it seem as if Trump is abusing his clemency power.

in that Trump has primarily pardoned his own co-conspirators, friends, campaign donors and cronies.  While some have occasionally pardoned a friend,  most past pardons focused on people who had been convicted under dubious circumstances or who had served time and turned their lives around for the better. I can't recall any president ever pardoning people accused of conspiring to cover up crimes committed by the president or people in his own campaign, which smacks of self-dealing and corruption.

all along since day one....the Trump administration was not so much a body politic but a poison dart with a delayed reaction which left us as a nation, cynical though we like to portray ourselves, as visibly uncertain at how to extrapolate not WHAT WAS HAPPENING IN REAL-TIME AS PER OUR DEMOCRATIC TRADITION, but grasping uncertainly for whatever device pleased our new Soverign...he reduced freedom-loving and hard-working people with indolent steeple, transforming the rich into God's of the Earth and the poor to be sacrificed like cattle to feed his revolution from above...he used as his textbook, I am firmly, the Short Course of the Soviet Union as written by its then Dictator and Lord-of-the-Realm, Josef Stalin....look into this "rambling" of mine via Wikipedia if you can even remember how, Americans, before you scoff and regurgitate the same stale lies we've been feasting on for over a year...how many of us on the street level of grassroots politics, radicals taking the fight to the New Elite as they rode roughshod over human rights and a hundred years of crucial civil rights reforms like the Gestapo and the NKVD they have been modeled from....how many police officers and families succumbed to a slight permutation of a cold that kills roughly the same number every YEAR that this "Pandemic" is claiming while I write this in a genuine patriots living room....how many scars have we, the poor, to show on our bodies and faces, missing teeth and limbs and loved ones, compared to the New Nomenklatura of Trumps New America...where veterans are forgotten conveniently if they served the department of defense after the war and quit for conscientious reasons (I quit the HAARP program as an armed security officer after the Fukushima reactor meltdown caused by a tsunami initiated by us while testing our much-trumpeted "secret weapon".....shortly afterwards in a case that made the Northern California Press Democrat newspaper, my 37 year old wife developed an easily-avoided and publicly developing case of typhoid fever induced by the loudly advertised and brazenly venal and corrupt rich landlord who wouldn't install a sewer ejector and a family of three underage girls and a 37 year old mother with her 36 year old partner became infected by the black mold and hysteria promulgated by the landlords delaying court action while hiring local "motorcycle club" enthusiasts recently released from jail and prison to shake up our 9 year old mentally ill daughter and to destroy evidence as it developed in order to avoid paying the fines necessary to bring a domicile of critical importance to the children and recovering adults in the house to codes exemplifying the sort of standards even a public toilet gets in California. She developed typhoid fever, turning into hepatic metastases into colon cancer and to a rate for of cancer which rendered her a frightening and evil witch who terrified and confused her children and turning the entire scene into a morbid and tasteless comedy where her partner, in this case myself, found himself in the end having sacrificed my opportunities for self-aggrandizement by returning to the defense industry fold wherebi would be willing to work in abnormal and inhumane conditions which made watching the deaths of thousands of people on TV every time we fired the weapon system on Shemya at the end of the Aleutian Islands in the Bering Sea an almost weekly affair
Corruption gets rewarded in the GOP. Now, they aren't even trying to hide it. Disgustingly un-American.
You will all recall how Congressperson Hunter at first courageously leveled all blame against his wife. Well as it turns out, she is serving her home detention sentence. And Duane? A Christmas miracle! There is your Republican family holiday story for 2020. I can't wait for the Hallmark special.