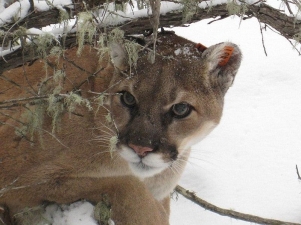 East County News Service
Photo: CC by SA
March 7, 2021 (Alpine) -- A necropsy has determined that 10 farm animals found dead in Alpine last month may have been attacked by a mountain lion or another predatory animal, says Lt Anthony O’Boyle with the San Diego Sheriff’s department.
On February 19th, deputies from the Alpine Sheriff's Substation were called to a property in the 400 block of Peutz Valley Road after 10 farm animals, including lambs, goats and a ram, were found dead in a pen.
At the time, deputies investigated the incident as a possible animal cruelty case. The owners were out of town when the attacks occurred and a relative feeding and caring for the livestock made the grisly discovery. Asked by ECM if the attacks could have been the work of a mountain lion or other predator, Lt. O’Boyle at the time stated, “We did not uncover any evidence indicating that this was a wild animal attack.”
But this week, the results of a necropsy by a county veterinarian revealed that some of the animals may have been attacked and killed by a mountain lion or another large predatory animal.
While there have been no reported mountain lion sightings in the area, the Sheriff's Department is urging residents in the area to be aware of their surroundings out of an abundance of caution.  Do not go outside at night alone.  Protect your pets by making sure they remain indoors, especially at night.  If you own livestock, make sure their pens are secure.
If you see a mountain lion or any other predatory animal, call the Sheriff's Department at (858) 565-5200.  In the event of an emergency, call 9-1-1.

It is known that mountain lions in particular will slaughter everything inside of a smaller pen. Behaviorally, this is likely a mountain lion. They are majestic creatures, I support every law to protect them. But they are known to do this exact kind of mass murder from time to time, and it goes to how to live with them through planning and architecture. If they feel cornered, they will kill everything in front of them. And they will jump into a pen, all of which creates a bad scenario that they just don't see in nature.
Headline: Mountain Lion May Have Killed Livestock... ("Guilty") Article content: Mountain Lion OR another large predatory animal... If that isn't sensationalizing this news I don't know what is. So many only read the headline, so you've planted what will be "fact" to many people. I'm disappointed in how you've reported this. Don't condemn without proven facts. I'm 100% for owners' need to protect their animals. Predators (wild, feral, or domestic) are part of our environment. There are proven measures in pens and security to insure those predators can't get to animals (pets, livestock, etc.); owners must recognize and take action.

I thought "mountain lion or another large predatory animal" sounded strange but it's what was in the official press release.

I've never heard of coyotes mass-killing like this, so in all likelihood it was a mountain lion especially give sightings nearby.  We don't have bears, or anything else native to our region that could do this. I don't think bobcats are large enough to do this. Possibly a pack of dogs could.

I do agree that owners should take precautions to protect livestock and pets, which is why in our followup article on this we listed the various methods recommended by the Mountain Lion Foundation such as keeping livestock in an enclosure with a roof, getting a livestock guard dog and/or using lights on motion sensors, noise etc to frighten away predators.