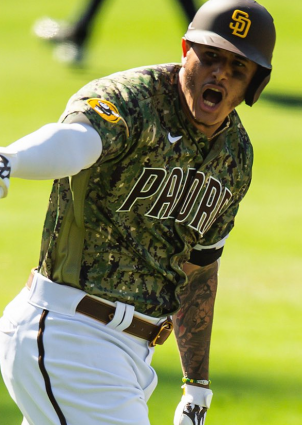 By Liz Alper
Photo via @padres on Twitter
April 4, 2021 (San Diego) - The Padres wrapped up their series against the Diamondbacks on Easter Sunday today.  Taylor Widener started for Arizona against Chris Paddack.

Unlike the first three games, this one didn’t get off to a good start for the Padres.  David Peralta hit a two-RBI triple on a ground ball to right in the top of the first and Arizona led 2-0 after one.

On a fielder’s choice by Peralta in the third, Josh Rojas scored to extend the Dbacks’ lead to 3-0 after three.
The Padres tried to rally in the ninth with a deep solo homer to left center from Fernando Tatis Jr., but the Dbacks prevailed and handed the Padres their first loss of the season with a 3-1 win.
UP NEXT
With the Diamondbacks finally gone, the Pads welcome the Giants for three games, the first being tomorrow night at 7:10 p.m.  Anthony DeSclafani starts for San Francisco against Adrian Morejon.

played a good series. hope it will continue.

The Padres are red hot this year with solid pitching, hitting and even some awesome fielding plays.  Winning three of their first four games is a promising start to the season.

Note for those who can't attend, the games are being televised on channel 56 for those with Cox in East County.