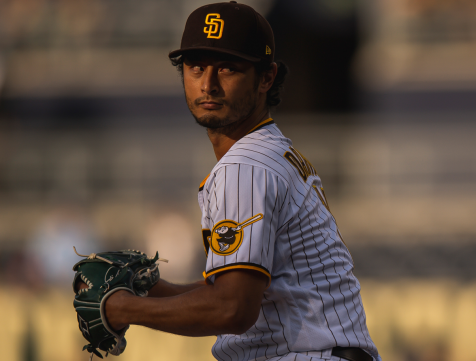 By Liz Alper
Photo via @padres on Twitter
April 17, 2021 (San Diego) - Last night was a long night.  We even got into weird baseball past midnight.  It had a benches-clearing brawl, extra innings and double digit scoring and it was only the first game of the series, but the Dodgers came out on top and took game one.  The Padres tried to rebound in game two tonight against Clayton Kershaw for the Dodgers against Yu Darvish.

With all the scoring and drama that happened last night, everyone wanted to take a break.  But the Dodgers were ready to get back to work by the fifth inning.  They loaded the bases and Darvish walked Kershaw to score Zach McKinstry.  Luckily, Darvish stopped the bleeding and the Dodgers led 1-0 after five.

Justin Turner added the dagger that allowed the Dodgers to take the series with a solo line drive homer to left and the Dodgers took the series from the Padres with a 2-0 win.  The Padres fall to 9-7.
UP NEXT
Tomorrow’s rubber game is at 1:10 p.m.  Trevor Bauer starts for LA against Blake Snell.

every year in the past when the padres beat up on the dodgers they did well. if you cannot beat the dodgers you have no chance,

But thankfully this series is over.  Tensions always run high; reminds me a lot of Red Sox-Yankees.