Update May 9, 2021: Supervisors unanimously approved Anderson's proposal.  Read our follow-up coverage.
By Miriam Raftery
Photo: map shows disproportionate number of sex offenders placed in East County
May 1, 2021 (El Cajon) – Community members held another rally April 28 at Wells Park to oppose the proposed placement of Merle Wakefield and Joseph Badger, both sexually violent predators (SVPs), at 10957 Horizon Hills in unincorporated El Cajon.  Now Supervisor Joel Anderson has announced he will introduce a directive at next week’s County Board of supervisors meeting instruction County Council and the Chief Administrative Officer to fully investigate what he calls “inexcusable and irresponsible weaknesses in the County’s current policies for the notification and placement processes for sex offenders and Sexually Violent Offenders.”

Anderson’s measure would require the staffers to report back with actions that can be taken to improve the processes and procedures used in notifying the public on proposed placements and living situations for sex offenders.

Supervisor Anderson says, “67% of all Sexually Violent Predators in San Diego County are in my district.  There are currently plans to place three more SVPs in District 2 in the near future, which will push that total to over 70%. This is the very definition of dumping.” Anderson adds that when he asked questions to better understand the process, roles and authority that various  County agencies and organizations have in these matters, he was shocked to receive “inaccurate and contradictory information.”
He adds, “This ends now. The appropriate placement of these dangerous individuals demands our full and immediate attention. When simple questions cannot be answered on such an important matter, the consequences are dangerous for the safety of our citizens, particularly our children. It is simply irresponsible to allow this situation to continue and I urge my colleagues to help me obtain the information necessary to make the changes that will protect our communities.”
According to Anderson, weaknesses in the current process include:
Anderson’s measure, if passed, would direct County Counsel and the Chief Administrative Officer to review numerous facts and questions that have been raised, and other  related issues, and determine what improvements can be made to the current processes and procedures to improve public notification surrounding the placement and residency of sex offenders.
Anderson held a press conference earlier this week with concerned parents and community leaders to highlight the inefficiencies in the current process. 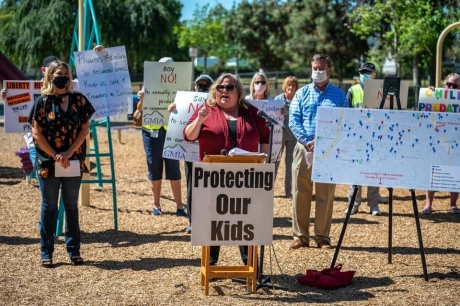 Another elected official, Helix Water Board member Kathleen Coates Hedberg, who is also president of the Grossmont Mount Helix Improvement Association, has been helping to organize the community to oppose the placements of predators whose convictions include rape, child molestation, and kidnapping at gunpoint.
On Facebook, she praised Anderson’s actions. “He’s proposing to make a difference in placement of these Predators in San Diego County and in the meantime I asked him to call Governor Newsom and stop the placement of Sexually Violent Predators Badger and Wakefield at 10957 Horizon Hills Drive, El Cajon,” Hedberg posted.
A hearing on Wakefield is set for May 10; an April hearing on Badger was held in San Diego Superior Court and the community awaits the judge’s decision.
Earlier predator placements have sparked outrage and opposition in other communities in recent years, including Jacumba, Boulevard and Campo, where residents complained of dangers to residents including children and slow law enforcement response times.

The reason we became a dumping ground was the 2006 initiative prop 83, also known as the "dump sex offenders in rural areas" law. Well, that was not the official title of Jessica's law, but every person of average intelligence knew exactly what banning sex offenders from living within 2000 feet of a school or park would do to our east county communities. The great irony here is that Joel Anderson's 2006 campaign for state assembly was founded primarily on passing this sex offender dumping law! Now he wants to do something about it? It would be hilarious if it were not so sad. But I'm not too hard on Joel here. Joel is not a stupid guy. His voters are the dimwits, and Supervisor Anderson knows the average voter does not (and probably can not) remember who endorsed prop 83. Prop 83 passed by 70%, and even higher in our east county area! If you are upset about this, chances are *you did it to yourself*, and are just too disconnected from reality to even realize it for yourself. You can't blame Anderson for playing his marks.
not vote for the idiot i knew what he was up too. but you are correct the "voters are the dimwits"!
believe he is the first to try this? Jacobs tried for years and got nowhere. good luck anyway. something needs to be done.