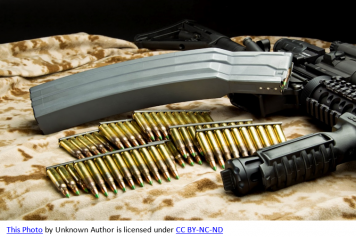 The appellate court’s majority opinion states that “the ban on legal possession of large-capacity magazines reasonably supported California’s effort to reduce the devastating damage wrought by mass shootings,” and found the laws to be constitutional.

Three judges, all appointed by former President Donald Trump dissented from the ruling, stating, “these magazines are lawfully owned by millions of people nationwide.” The trio, judges Lawrence Van Dyke, Patrick Bumatay and Ryan Nelson, further suggested that if applied nationwide, such a law would “require confiscating half of all existing firearms magazine in this country.”

The law and ballot measure upheld by the court were backed by Gavin Newsom, then Lieutenant Governor. Following today’s ruling, Newsom tweeted, “Weapons of war don’t belong on our streets. This is a huge victory for the health and safety of all Californians.”

Locally, Michael Schwartz, executive director of the San Diego County Gun Owners organization in Santee, issued a statement sharply criticizing the action. “This decision essentially turns hundreds of thousands of people in California into felons for owning normal gun parts,” he said, adding, “A magazine is an essential part of a firearm and firearms are protected by the Second Amendment. The ability to defend yourself should not be limited by an arbitrary restriction put in place for political reasons.”

Plaintiffs have announced their intention to file an appeal, Associated Press reports.  Ultimately, the conservative-leaning U.S. Supreme Court could render a final decision on the controversial case.

The 2nd Amendment includes "well-regulated militia" and "right to bear arms." Numerous historians have found phrase "to bear arms" ONLY applies to military. "Arming oneself" can refer to individuals; but, again "bear arms" strictly for military. So, if our courts now believe the 2nd Amendment applies to individuals, then taking it literally from the phrase "right to bear arms" would mean that individuals have the right to any weapon considered "arms" by militaries. So, individuals should be able to own hand grenades, 50-caliber armor piercing machine-guns, flame throwers, bazookas, and even surface-to-air missles. Or if courts rule one can only own "guns" for self-defense, then an assault rifle by its very name is not for self-defense.

Americans own more guns by far than any other advanced democracy and have literally by far the highest murder rate, mostly involving guns, and seems almost every day another random attack in schools, shopping malls, workplaces, etc. Over the years several Supreme Court Justices have stated "The Constitution is NOT a suicide pact"; but the ever more looser interpretation of the 2nd Amendment seems to contradict them.

Not sure if this breaches the 2nd Amendment, if so, it is unconstitutional and that is what the news agencies should report on.