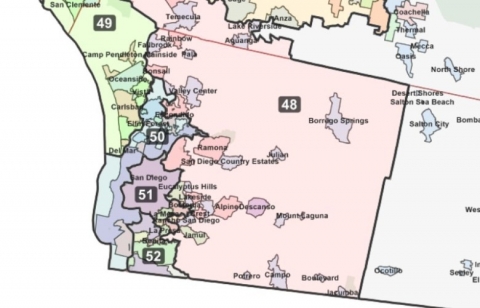 “It has been the honor of my life to serve the people of California’s 53rd Congressional District,” Jacobs says.  “I am excited to continue to serve so many of my current constituents and a number of new communities that mean so much to San Diego in the 51st district. This first year in Congress has been historic on many fronts, and through it all, we’ve shown that you don’t have to settle for the way things have always been done.”

She adds, “From historic investments in infrastructure, to expanding the Child Tax Credit and benefits for military families, we’ve succeeded in so much during this Congress, and there’s still more to do. I’m eager to continue working to build a future that works for all Americans.

Issa announced his decision to seek reelection in the new 48th district, adding, “It is a community I know very well, have represented in Congress before, and hope to continue to serve for years to come.”  Issa is currently the representative of the 50th Congressional district. With redistricting, he will pick up the southeast portion of East County previously represented by Vargas including the communities of Potrero, Campo, Boulevard, Alpine and Jacumba while continuing to represent Lakeside, Santee, Ramona, Julian, Borrego Springs, several North San Diego County cities including San Marcos, Escondido, Fallbrook and Valley Center, as well as Temecula in Riverside County.

The redistricting commission was under a court-ordered deadline to submit its maps to the Secretary of State by Dec. 27 despite a six-month delay in release of census data.  As a result, the commission held many late-night sessions to hear public comment and try to balance often completing interests. Potential court challenges could alter the outcomes, however.

By law, all Congressional districts must have equal populations with no more than a single individual difference in size. The nonpartisan commission is not supposed to allow political concerns to sway its decisions, must keep districts compact and try not to separate communities of interest, such as ethnic minorities.

The resulting maps for California, a heavily Democratic state, create 43 Democratic-leaning eats, seven Republican-leaning seats, and two highly competitive seats, similar to the current map except that the state lost one Democratic-leaning seat due to population loss.  Statewide, Latino voters stand to benefit with 16 of the state’s 52 House districts now having at least 50% of voters who are Latinos of voting age.

“There was robust discussion in terms of how these maps should be drawn,” Commission chairperson Alicia Fernandez told CalMatters.  “We know that not everyone will be happy, but I feel that they are fair maps for Californians.”

Commissioner Pedro Toledo, a no-party-preference voter and CEO of Petaluma Health Center, observed, “We accomplished all of this while in the midst of a global pandemic and unprecedented adversity that impacted us all personally, impacted our communities and our state.”

The new map of our representative districts looks like the spots on a leopard, divided and scattered. Two of the districts are so scattered, it's nearly impossible to tell which you are in. The East county mountains have always been juxtapositioned districts with equal values, and now it's chopped up into separate communities with separate representatives. Maryland's disconnected districts are like this, and is currently being sued for gerrymandering.

We voted to have independent citizens' commissions draw new congressional districts, after each census. Our districts must meet criteria of fairness to voters.  In other states, political leaders draw their districts for their own advantage, at the expense of fairness.  While we lost one of our seats because our state did not grow as fast as others, we remain the state with the greatest number of seats in the US House of Representatives.  To some extent, this compensates for having only two senators for nearly 40,000,000 people.  Seven states have so few people that they have only one member of the house, but yet retain two senators.  This maladjustment in the Senate must end. We should not continue to allow minority rule by senators who lack concern for our well-being.

When the Constitution was written, there were strong objections by small states to Majority rule, also known as Gang rule. Their argument was that 3 or 4 largely populated states would always dominate the vote, and permanently rule over the smaller states which covered the majority of the country's territory, leaving them no voice in governing their nation. That was mediated by only allowing 2 senators per state in the Senate, giving the smaller states an equal standing in one chamber, while the other camber would represent smaller districts within the states. The laws and the Constitution were clear, that minority voices would have a say in how our country is run. If every election or decision was based on majority rule, one could justify, with a simple majority vote, what went on decades ago with lynchings and blacks in the back of the bus. Our country is a Republic, and our Constitution states it as so, and not once is the word Democracy in it, as the founding fathers specifically avoided the concept. The impetus of Checks and Balances created the importance of protecting the rights of every state, and in particular, the country's breadbasket states,not just the few dense states along the coast.
should be in jail for his crimes and who does not live in the district! keep voting for the righty tRump sucker