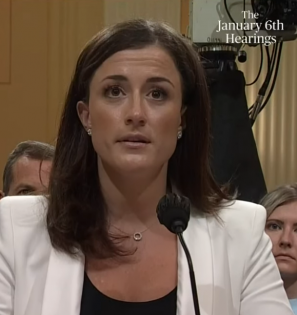 “This is the smoking gun.” –Solomon Wisenberg, former deputy independent counsel in Ken Starr’s investigation that led to the impeachment of former President Bill Clinton.

“Donald Trump and his allies and supporters are a clear and present danger to American democracy.” –conservative Judge J. Michael Luttig

View videos of all hearings held to date by the Select Committee to investigate the January 6, 2020 attack on the capitol:  https://www.youtube.com/c/January6thCmte

June 29, 2022 (Washington D.C.) – Former President Donald Trump was warned that a mob assembled on January 6 was armed with weapons including semi-automatic rifles, spears, pistols, body armor and bear spray, yet he urged the Secret Service to take down metal detectors at his rally at the Ellipse, since some were refusing to enter.  He then incited the crowd inside and outside the secured area to march to the capitol, according to testimony presented yesterday to the Senate’s committee investigating the January 6 insurrection by White House aide Cassidy Hutchinson, a Republican. (View video of her testimony)

Nearly all of the most damning testimony  to date implicating former President Donald Trump in a willful scheme to steal an election he knew he’d lost came from prominent Republicans, including a respected conservative judge, Republican lawmakers, and election officials.

Hutchinson further testified that despite White House Counsel Pat Cipollone advice not to go to the Capitol at risk of being arrested for multiple violations of the law, Trump tried to force his Secret Service agents to take him to the Capitol and indicated that he didn’t care if the mob hung Vice President Mike Pence.

Hutchinson was a top aide to Mark Meadows, White House Chief of staff at the time and had an office located between the Oval Office and the Vice President’s office.

“This is the smoking gun,” Solomon Wisenberg told the New York Times. Wisenberg is a former deputy independent counsel in Ken Starr’s investigation that led to Bill Clinton’s impeachment. He added, “There isn’t any question this establishes a prima facie case for his [Trump’s] criminal culpability on seditious conspiracy charges.”

Hutchison stated that an angry Trump stated after being told the mob was armed, “I don’t fucking care that they have weapons; they’re not here to hurt me. Take the fucking magnetometers (metal detectors) away. Let my people in.  They can march to the Capitol from here.” Secret Service refused to remove the magnetomers, however.

Hutchinson said she felt fearful, indicating that Cipollone told her to make sure the motorcade did not go to the Capitol, predicting Trump and others would be “charged with every crime imaginable” and that it would appear Trump was “encouraging a riot,” the 26-year-old aide calmly told Congressional panelists.

She also stated that she was told by Tony Ornato, White House deputy chief of staff, that Trump became enraged when told that for security reasons, he would not be taken to the Capitol. Ornato reportedly said Trump stated, “I’m the fucking president,” and ordered the vehicle to go to the capitol, even attempting to grab the steering wheel and lunging at Robert Engel, head of the security detail, though the latter point is in contention. CNN reports that Ornato and Engel recall the vehicle incident differently. Though Engel has previously testified that Trump sought to go to the White House, he is reportedly prepared to attest that Trump did not lunge or threaten to harm him.)

Hutchinson also testified that while rioters shouted “Hang Mike Pence,” she became increasingly alarmed, as did Cipollone, who implored Meadows to have Trump take action to stop the mayhem. But Meadows said, “He doesn’t think they’re doing anything wrong,” indicating Trump would not intervene. 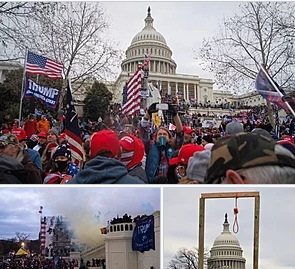 Hutchinson said Trump’s personal lawyer Rudy Giuliani told her Trump planned to lead the march, four days before it occurred; Meadows told her that “things might get real, real bad on January 6,” she added.  Both Giuliani and Meadows sought pardons for their actions related to the insurrection, Hutchinson told the committee.

She also described disturbing temper outbursts by Trump, indicating he threw plates with food at walls twice, once in anger after the Secret Service and aides refused to take him to the Capitol, the other after seeing Attorney General Barr in a media interview stating the election was not stolen.  Hutchinson described ketchup running down the wall after that incident.

At the end of the hearing, Republican Liz Cheney revealed that individuals with ties to Trump have tried to intimidate several witnesses, including Hutchinson.

In other recent hearings held by the committee, other witnesses provided additional testimony corroborating that Trump knew that were no fraud, yet pressured officials to commit illegal acts.  Specifically, witnesses stated that Trump:

Trump’s Attorney General, Bill Barr, told him his claims of a stolen election through fraud were “bullshit.” His White House Counsel, campaign chair and others all concurred, as did 62 judges who all ruled against Trump in his legal challenges to the 2020 election.

One conservative lawyer, John Eastman, put forward a debunked theory that Vice President Mike Pence could certify votes from fake slates of electors in key battleground states, instead of the actual votes of the real electors, or alternatively, that Pence could simply refuse to certify and kick the matter back to states. But Eastman knew this theory was not credible and when pressed, told Vice President Mike Pence’s top lawyer, Greg Jacob, that the Supreme Court would likely rule unanimously against the legality of this action.  The FBI this week raided Eastman’s home after he refused to testify under a subpoena; he now faces likely criminal prosecution.

A highly respected conservative judge for whom Eastman once clerked, J. Michael Luttig, testified, ““There was no basis in the constitution or laws of the United States – at all – for the theory espoused by Mr. Eastman. At all, none.”  Judge Luttig further stated that it would have been illegal for Vice President Mike Pence to take such action, since “The Constitution does not empower the vice president to alter in any way the votes that have been cast, either by rejecting certain of them or otherwise.” He added that such action would have thrown the nation into a “constitutional crisis.” View Luttig video.

Mike Pence repeatedly refused Trump’s demands. Yet even when informed that a mob was chanting “Hang Mike Pence” and erected a gallows outside the Capitol, Trump issued an inflammatory tweet further endangering Pence, stating, “Mike Pence didn’t have the courage to do what should have been done,” a statement akin to pouring gasoline on a fire, according to one Pence aide’s testimony. Pence’s chief of staff grew alarmed for Pence’s safety and at one point the violent mob that invaded the capitol came within 40 feet of the Vice President.

Well before the attack on the Capitol, Trump engaged in the crime of seditious conspiracy, detailed by Hutchison and others. She outlined what Watergate journalist Carl Bernstein described as the “legal, moral and criminal case” against Trump.

Department of Justice officials testified to Trump’s attempts to pressure them to lie and when they refused, to replace a key official  with a Trump supporter.

In a Dec. 27 call with acting Attorney General Jeffrey Rosen and Donoghue, Trump was not interested in the actual results of a DOJ investigation, Donoghue said. Rosen told Trump the department could not change the outcome of an election. “He responded very quickly,” Donoghue said. “And he said, essentially, ‘That’s not what I’m asking you to do. What I’m asking you to do is to say it was corrupt and leave the rest to me and the Republican congressmen.’”

Republican officials tied Trump directly to a fake electors plot in Georgia and Arizona. When the officials refused to commit illegal acts, he unleashed threats on the officials and their families.

Georgia’s Republican Secretary Bard Raffensperger testified that when Raffensperger insisted in a phone call with Trump that he had lost Georgia, Trump issued a threat if Raffensperger would not find votes that didn’t exist, stating, “That’s a big risk to you. All of this stuff is very dangerous.” He and his family were targeted with threats, he detailed.

Arizona’s Republican House Speaker Rusty Bowers said  he refused because “I did not want to be used as a pawn.” After he refused Trump’s illegal demand to certify fake electors, Bowers said his home address was published and protesters disrupted his family life at a time when his daughter was in their home, critically ill.

Georgia election worker Wandrea “Shaye” Moss and her mother, Ruby Freeman tearfully told the committee of vile threats they received after  Trump told lies that made his followers believe that they had committed acts to steal the election for Biden – a lie that has been debunked even by Georgia’s Republican Secretary of State.  Freeman said she was told by the FBI that she wasn’t safe at home and was forced into hiding for several months, feeling “homeless.”  Moss says she is fearful to show her ID or have her name said aloud even now, for fear of violence by Trump’s followers.

Trump used the big lie of election fraud that he knew didn’t exist to bilk his followers out of a fortune. Trump’s former campaign staffer, Hanna Allred, told the committee that the “Election Defense” fund he solicited money for didn’t exist. The committee found that most of the quarter of a billion dollars raised was not spent on election legal challenges, but instead diverted to other causes including Trump Hotels and conservative Partnership Institute headed by Meadows, Trump’s Chief of Staff. Funds also went to fund the rally on the Ellipse where Trump tried to get armed followers admitted, as well as to the America First Policy Institute, which paid Trump’s daughter-in-law a hefty speaker’s fee.

More legal experts on both sides of the political aisle are now calling for Trump to be prosecuted – and the former President is losing support even from some conservatives.

The Washington Examiner, a conservative newspaper, published an editorial today declaring Trump “unfit” to hold political office in the future.

The Boston Globe, Las Vegas Sun, and Seattle Times have all published editorials calling for Trump to be prosecuted.

Former Attorney General Eric Holder has concluded that revelations that former President Trump told the Department of Justice (DOJ) to declare the election “corrupt” amounts to a “smoking gun.”

Trump at the head of the conspiracy . What garbage. When are we going to hold those responsible for the lies , fake accusations, phony Hillary Clinton bought and paid for fake dossiers and numerous people on the left LYING UNDER OATH during the FAILED, PHONY Impeachment Trials against Trump. That is ok though with all of you!
idiot did was way worse! besides the retrumplicans investigated her for months and found NOTHING!!!
to the orange idiot. what he did is way worse than want Nixon did. but I will not be holding my breath.