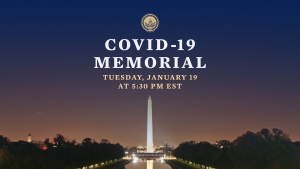 Update from San Diego's Mayor Todd Gloria:  "San Diego will participate in the National Memorial to Lives Lost to #COVID19 as organized by @JoeBiden and @KamalaHarris "Tonight, the Convention Center and buildings in #BalboaPark will be illuminated in amber and red, white, and blue to honor those we have lost to the virus."

Jan. 18, 2021 (San Diego’s East County) Part of the inaugural events for President-elect Joe Biden and Vice-President-elect Kamala Harris include a service tomorrow afternoon, Jan. 19, at 5:30 p.m. eastern standard time. The service will be held at 2:30 p.m. pacific standard time. They encourage all to light a candle in memory of those lost to COVID19 and place it is a window.

On the official Facebook page for the inauguration, the event is described as such:

“On January 19 at 5:30pm (local time- E.S.T.- 2:30 p.m. P.S.T. in California) we invite Americans across the country to come together for a national moment of unity and remembrance to honor the lives lost to COVID-19.

In Washington, D.C., we will host a ceremony with President-elect Joe Biden and Vice President-elect Harris, featuring the first-ever lighting of the Lincoln Memorial Reflecting Pool to honor and remember those who have died. You can watch live on Biden Inaugural social media channels.