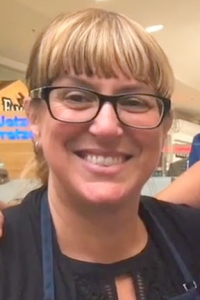 October 23, 2019 (El Cajon) -- As part of East County Magazine's investigation of the Cajon Valley Union School District, ECM asked Superintendent David Miyashiro, EdD and school board President Tamara Otero to back up their often repeated claim that the district has reaped great benefits with its more than half-million dollars in expenditures on  videos over the five years. Both ignored multiple requests for verifiable benefits and for interviews.

On Friday, at 1:45 p.m., however, ECM received a response to our California Public Records Act request from Naomi Rodrigues, the district’s Executive Coordinator. Our request asked for any verifiable financial and enrollment benefits from the district’s paid marketing and promotional videos published on YouTube from July 2014 through Sept. 24, 2019.

“NO SUCH DOCUMENTS EXIST” wrote Rodrigues (photo, left) in her e-mail to ECM.  It is unclear if she was aware of our article published shortly before her response was received.

Although the district could not document any financial benefits or increased enrollment tied to its videos, less tangible benefits may include increasing student morale and boosting the district’s image elsewhere. Consistent with the latter point, Rodrigues listed four videos which she indicated have been featured and showcased by the San Diego County Board of Education.  (View full e-mail response from Rodrigues.)

Value of videos questioned back in 2016

East County Magazine news partner 10News, in November 2016, questioned Miyashiro on excessive spending on videos. At the time, he defended spending $20,000 on two videos promoting the district’s “Red Ribbon Week” and its relationship with local first responders. Similar videos were just released in the past month.

The 10 News video showed short interviews with CVUSD elementary students on why they wanted to be firefighters or law enforcement officers.  Those videos, produced by the now out-of-business Los Angeles firm, FeFiFo Films, cost $20,000.

In the 2016 news report, Miyashiro claimed the videos “are really investments in our bottom line.” He also claimed that the marketing effort helps attract students. He also said that each student equals about $10,000 per year in state education funding.

But three years later, ECM’s records request seeking increased enrollment tied to the videos or other documented revenues to the district yielded no such findings.

Although Miyoshiro and members of Board of Trustees continue to regularly tout success of the district’s videos, by the district’s own admission, it cannot produce any documentation to show that those claims are true.

The district has not answered separate CPRA requests from ECM for many other documents, including copies of contracts and invoices for the recent “flash mob” video which cost taxpayers at least $21,500 for a Los-Angeles based choreographer. The video, which ran just over four minutes, was produced and directed by the Media Arts Project.

Under state law, public agencies including school boards must fulfill public records requests from media or the public within 10 days. Under certain circumstances, such as when extensive searches are needed, the agency may extend the deadline by 14 days.

The district is currently in violation, with numerous records requests that have not been filled, some dating back months. Those include reports of any outside income, such as consulting fees and travel expenses filed by the Superintendent and board members.

After an attorney for Californians Aware (Cal Aware) contacted the district over CPRA violations involving audio recordings of public board meetings, the CVUSD board last March voted unanimously to retain recordings and make them available to the press or public for one year after each meeting.

Since then, the district has reneged on its promise and Rodrigues has insisted that the policy is to retain meeting records for a year, but only make them available to the press or public for 30 days. That is in direct conflict with the board action on March 26.

Hear ECM’s audio link of  March 26 board discussion on this policy change, including board president Tamara Otero at the end clarifying an amendment to make the recordings available for one full year.

The district has also threatened our reporter with arrest for recording public meetings and repeatedly attempted to move our recording equipment to the back of the room under a noisy air conditioner, actions which violated the state’s Ralph M. Brown open government law and resulted in a cure and correct letter from attorney Corey Briggs to the district, which has since ceased those actions.

The district’s lawyer, Dan Shinoff, at one point suggested ECM send records requests to his office. ECM did so, and received responses in a timely manner. However, Rodrigues then demanded that ECM stop contacting Shinoff and even sent reporter Paul Kruze a bill for the district’s legal services. ECM has been advised by counsel that this is an illegal action by the CVUSD.  Rodrigues asked that all records requests be sent to the Superintendent’s office via herself, which is what ECM had done previously, with most requests never fulfilled.

Since the CVUSD has reneged on its adopted policy of turning over meeting tapes for a full year, and since the district has repeatedly failed to comply with California Public Records Act requests crucial for the public to know how taxpayer funds are spent and whether any conflicts may exist, ECM is now consulting with legal counsel on future actions to hold the CVUSD accountable.