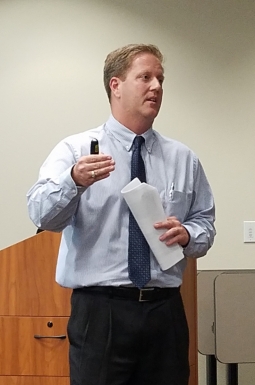 June 26, 2019 (El Cajon) -- Cajon Valley Union School District Assistant Superintendent Scott Buxbaum (photo, left) painted a positive financial forecast for the district at its Board of Trustees meeting on Jun 11, after attending a meeting in Sacramento with Governor Gavin Newsom.

The latest financial forecast based on the Governor’s May budget revision is good news not only for the CVUSD, but for all local public school districts. Newsom, a father of young children, has pledged to make public education funding a priority.

According to Buxbaum, the May Revision builds off of Newsom’s “California for All” vision from January. Due to strong April tax revenues, Newsom was able to retain most of his proposals from January, and invest additional funds into programs he has envisioned as prioirities. 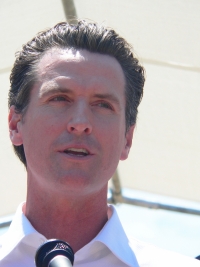 Governor Newsom (ECM photo, right, in San Diego) has also put away $1.2 billion into a rainy day fund, “the highest in California history”  which brings total reserves to $16.5 billion, said Buxbaum, who called the action “good news for when times are tough.” He added that an economic recession may come sometime next year and the approach will lessen the effect of any anticipated cuts.

It is expected to reach its constitutional cap of ten percent two years earlier than predicted. This is projected tol bring the ”Rainy Day Fund” balance to $18.7 billion dollars.

The revised budget will also include a deposit of $389 million into the Public School System Stabilization Account, as agreed to by the CA State Assembly Budget Conference Committee.

“It is nice that pre-schools are going to get some funding,” Buxbaum said.

Teachers are also expected to benefit from Gov. Newsom’s budget projections. The California State Teachers Retirement Program (CalSTRS) will also benefit with an additional $150 million dollars allocated to his January proposal that would further reduce the employer share of the CalSTRS unfunded liability.

The May Revision of the governor’s budget proposes a new program under the title, “Special Education School Readiness Grant.” This grant program would provide flexible funding based on Special Education pupil counts for concentration grant districts.

(LCFF is the school financing system enacted in 2013 which replaced the prior K-12 finance system in existence for roughly 40 years. For school districts and charter schools, the LCFF establishes base, supplemental, and concentration grants in place of previous K–12 funding streams, including revenue limits, general purpose block grants, and most of the 50-plus state categorical programs at the time. The new approach changed how all local educational agencies in the state are funded, how they are measured for results, and the services and supports they receive to allow all students to succeed to their greatest potential.)

Buxbaum noted that because of starting up a new charter school in the next school year, CVUSD state revenues may decrease somewhat. “Although we do everything to keep kids with us, we may lose enrollment next year,” he said.

Both the State Assembly and Senate passed the primary 2019-2020 budget blueprints on June 13. It is expected that the governor will sign the budget into law on June 30. 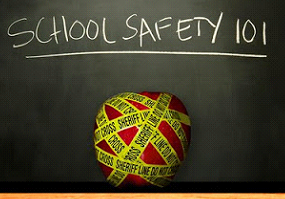 The CVUSD Board of Trustees once again held no discussion at its June 11 meeting of a report released by the San Diego County Grand Jury that called on the district, along with several other districts, to improve school safety plans. While the Grand Jury found that some campuses in San Diego County have done well to prepare for active shooter situations, it noted that there is still room for improvement.

While the report admits that school safety “is a highly complex issue to which there is no universal, inexpensive, or foolproof solution,” it did made specific recommendations for districts to implement by March 20, 2020. They included that that districts prioritize funding for training, equipment and infrastructure improvements, including substitute teachers and all other adult campus workers in active shooter training. Also recommended is for districts to conduct “vulnerability studies” at all school sites that account each campus’ unique layout Collaborate with school officials, law enforcement, first responders and mental health practitioners.

The district heard recommendations from its hired consultants at its December 2018 meeting.

ECM has learned that the CVUSD may be discussing in September the possibility of asking voters to approve a bond measure to finance the suggested security upgrades at local school schools.

"Newsom’s “California for All” vision from January. Due to strong April tax revenues". Wait! sounds like our State is rolling in dough, as this new Governor is spending it like there will be no tomorrow. Wait again! Perhaps all the new taxes levied upon us are enriching the States bankroll putting Newsom in a good spending mood. It certainly offends me each time I check out and pay the highest gas tax in the nation, pay lumber taxes upon state taxes for nuts, bolts, wood, EVERYTHING! This State Legislature and Governor have gone mad!