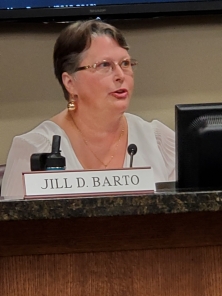 January 3, 2020 (El Cajon) -- The Cajon Valley Union School District (CVUSD) has filed a suit in state court against Trustee Jill Barto. The suit was filed after Barto’s federal lawsuit alleging violations of her civil rights and First Amendment rights. Barto filed her complaint in late November against the District, the other four trustees and Superintendent David Miyashiro, as ECM reported.

The district’s suit alleges that in 2019, the District received a complaint from an employee alleging that Barto was harassing her and “created a hostile work environment.” It also states that the Board of Trustees formed an Ad Hoc Committee to investigate the employee’s complaint. The suit does not directly identify any district employees by name and does not directly the names of the ad hoc committee.

The suit further accuses Barto of disclosing information learned during closed-door board sessions, taking district owned supplies such as pens and batteries, and inaccurately reporting income on her Form 700. In addition, the district claims Barto had a conflict of interest in agreeing to serve as a witness on behalf of individuals suing the district and appearing as an advocate for parents whose position was “adverse to the District’s position.”

Barto told ECM that the district’s suit is “retaliatory and without merit,” adding that she looks forward to providing evidence in court.

Barto’s suit alleged that her colleagues on the CVUSD Board of Trustees have repeatedly tried to prevent her from fully representing her constituents, who have continually returned her office since 1994. Mostly recently, Barto was re-elected in November 2018 with nearly 69 percent of the vote in her trustee district 2 position, trouncing the son of current board Jo Alegria, Andrew Alegria, who only garnered 31 percent of votes.

An ECM investigation found the district spent over $600,000 on promotional and marketing videos since Miyashiro became superintendent in July 2014.  Most recently, Barto questioned the authorization of up to $21,000 for a New York-based producer to choreograph the district’s flash mob video. The receipts submitted by CVUSD as a part of ECM’s request indicated that the district spent $10,000 for video production and editing of the four-minute video, on top of the cost of the choreographer. The CVUSD has failed to turn over all receipts to ECM in response to a California Public Records Act request.

NBC San Diego recently reported that Miyashiro has made 59 trips at a cost of $1.1 million dollars in the course of two years – since March 2017 -- to destinations around the world. According to the district, these trips were largely to market its “World of Work” curriculum to other school systems.

Barto has previously told ECM that the district has blocked requests for public records that she has submitted, including requests for tapes of meetings and information on agenda items.

ECM has twice had to have attorneys send cease and desist letters to the District, first for refusing to comply with timely public records requests for tapes of public meetings and second, for threatening to arrest our reporter for lawfully recording public meetings.

Barto’s federal civil rights lawsuit claims that, “Plaintiff is fiscally minded and has spoken on behalf of her constituents, even when it means disagreeing with other Trustees/Defendants.” It goes on to claim that Miyashiro and members of the Board of Trustees have denied her right to hold and serve office.

Among the other accusations, Barto alleges that, “Defendants took action of chill or silence Plaintiff from exercising her constitutional rights under the First Amendment. Defendants took away Plaintiff’s ability to speak of District employees, to be present at Board meetings, to participate at conferences and events other Trustees participate in. They cancelled her Cal Card, and have prevented her from providing meaningful input to her constituents.”

A “Cal Card” is a provisioned VISA credit card which allows elected officials to charge expenses in connection with the duties and responsibilities to their public elected office.

Separately from filing a countersuit, the district also filed a response to Barto’s complaint. In the response, CVUSD attorney Randall L. Winet of the law firm of Winet Patrick Gayer Creighton & Hanes has submitted a motion to dismiss the complaint for lack of subject matter jurisdiction, citing the U.S. Constitution Eleventh Amendment.

The Eleventh Amendment specifically prohibits federal courts from hearing cases in which a state is sued by an individual from another state or another country. Protecting states from certain types of legal liability is a concept known as “sovereign immunity.” Winet claims that the school district cannot be sued because the defendants are an arm of the State of California and are immune from a suit in federal court.

Barto’s attorneys, Michael J. Aguirre and Maria C. Severson, contend that the U.S. Federal Court is a correct venue for the lawsuit because Barto has had her constitutional civil rights deprived and abridged by the district.

Winet will argue his claims on behalf of the district when the suit goes before Judge William Q. Hayes and Magistrate Kasen S. Crawford on Friday, Jan. 27 in room 14B at a time yet to be specified by the court.

I am a teacher in the CVUSD. Jill Barto is the only CVUSD board member who has visited my classroom. She has also attended special events at my campus. Pleased that she represents the interests of our students and their parents.