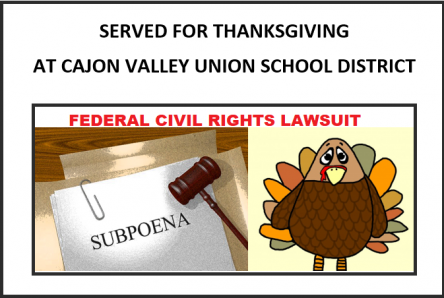 The summons states that Barto “raised issues about how much money District Superintendent Miyashiro has spent on his travel and conference costs, and raised questions about the size and nature of expenditures from his discretionary funds.” 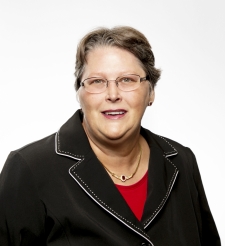 Barto was first elected to the Board of Trustees in 1994 and has served for 25 years.

NBC 7 San Diego, which has also been investigating the district alongside East County Magazine, confirmed that the district staff took frequent trips at taxpayer expense and Miyashiro attended professional conferences, World of Work, and TED Talks and events in Vancouver BC, Chicago, Beijing, Hawaii, London and Tallahassee, Florida.

NBC 7’s investigation found that Miyashiro took 59 trips and spent $1.1 million dollars and conferences since March 2017. Miyashiro funded 51 of those 59 with “discretionary” funds approved by the CVUSD Board of Trustees. View video of NBC 7’s investigation, including an interview with ECM journalist Paul Kruze.

The whole Barto situation and revelations of overspending all comes at a time when the district is preparing to go to voters in March to ask them to fork over half-a-billion dollars bond over 40 years.

East County Magazine has previously revealed that the district has spent over $600,000 thousand dollars on promotional videos over the span of five years since Miyashiro took office-many times more than neighboring districts spent on videos. Although the CVUSD has refused to answer and provide receipts requested by ECM, it spent at least $21,500 for a professional dance choreographer based in Los Angeles to conceptualize and hold rehearsals for a “flash mob” video shot at the Parkway Plaza Mall in El Cajon which was released in mid-August to almost 68,000 views on Youtube. 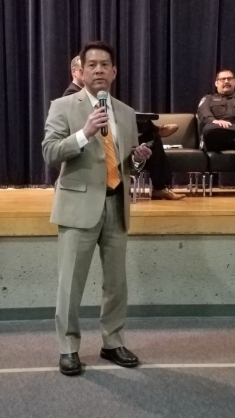 San Diego 10News called out Miyashiro on his excessive spending habits on videos in 2016. Then, the Cajon Valley Union School District Superintendent defended spending $20,000 on two videos to promote the district’s Red Ribbon Week and its relationship with local first responders. Miyashiro defiantly told 10News that was intending it to do it again.

Ironically, all of the monies spent by the district on Miyashiro’s and staff travel expenses and promotional video would more than cover the $1.2 million dollars needed to fulfill the critical recommendations made by the San Diego County Grand Jury to improve security at Cajon Valley’s over two dozen elementary and middle schools in the wake of mass school shootings across the nation.

Barto has indicated that Miyashiro, Board of Trustees President Tamara Otero, and the other board members, Jim P. Miller, Karen Clark-Meija and Jo Alegria, began retaliating against her after her re-election in 2018 when she openly questioned the travel expenditures and raised other concerns on issues ranging from alleged bullying of a Somali Muslim student to money spent on videos. The district has flatly refused to fulfil Public Records requests made by Barto, including requests for audiotapes of public meetings.

ECM has had its own challenges obtaining records and protecting First Amendment rights of our reporters to cover public meetings. It’s taken threats of legal action by two attorneys to enforce our rights as journalists.

Similar requests for audio recordings made by ECM were also denied, with he district claiming it destroyed a tape in which a parent complained of numerous schools failing state Dashboard standards for math and English, until ECM had attorney Terry Francke with Californians Aware send a cease and desist  letter to the district. Miyashiro has said the Dashboard measures the “wrong metrics.”

When ECM began recording CVUSD meetings to assure public access, the district demanded that reporter Paul Kruze move under a noisy air condition in the back of the room and threatened to arrest the journalist if he did not comply. The district ceased its threats only after receiving a letter from attorney Cory Briggs on ECM’s behalf.

Things did not get any better for Barto when she questioned a $665,000 building contract which was awarded to Otero’s son, Dryw Otero and his new El Cajon company, Otero Construction.

In that situation, as reported by East County Magazine, prior to the vote Otero was asked by fellow board member Jill Barto, “It looks like….is this your husband’s company?” Hear audio. Otero replied, “No,” and immediately brushed off the question, saying the internet connection to her computer on the dais was disconnected. (Barto says she asked about the family connections but her phrase, “and your family” was masked by Otero’s response. Otero abstained from voting, but did not state why, and remained in the room during the discussion.) According to the website of the California Fair Political Practices Commission, “Certain officials (including city council members, planning commissioners, and members of the boards of supervisors) have a mandated manner in which they must disqualify from decisions made at a public meeting (including closed session decisions) and must publicly identify a conflict of interest and leave the room before the item is discussed.”

Barto also alleges that Miyashiro expressly prohibited her from contacting district employees directly and prohibited her from using her CalCard (a credit card issued to each Board member to make purchases when conducting District business) to pay for a ticket to an event put on by El Cajon Mayor Bill Wells. Miyashiro last month canceled her “CalCard.” Barto has also been barred from closed-door meetings and banned from attending an education conference slated for San Diego in December in her capacity as a board member. 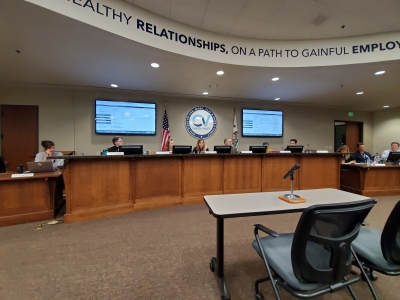 Specifically, as written in the lawsuit, Barto “is endowed with a First Amendment right to speak critically of her government. As an elected Trustee of a board charged with governing the school district, [Barto] has an obligation to take positions on controversial political questions so that her constituents can be fully informed by them.”

The lawsuit then claims, “acting under the color law within their official positions in the District as set forth herein, and in so doing, have violated [Barto’s] right of free expression under the First Amendment of the United State Constitution.”

Although Barto has not released an official statement on her court action, she wrote on Wednesday night a short e-mail to her family and friends saying, "As you know over the last year, I have been continuing to ask for accountability and transparency on this board. But I have been blocked, marginalized and retaliated against and hindered from serving my community. After careful consideration and prayer, I had no choice but to file a lawsuit against the superintendent and fellow board members in Federal Court for Civil Rights and First Amendments violations to protect my rights to serve my community."

"I can’t thank all of my family and friends enough for your support during this hard time. I trust that soon the great work in the district will be again the priority and the focus will once again be back to what is best for our students, staff and community over retaliation for me trying to do my job.  Please continue to pray for us as we continue to fight for what’s right.  I’m honored to serve my community as I have for the past twenty-five years and will continue to be your voice on the Cajon Valley Union School Board," Barto wrote.

ECM contacted Miyashiro for comment on the civil rights lawsuit, but he did not return a  phone message. Tamara Otero answered ECM’s call, but said she did not have a response, stating she was “out of town.”  Trustees Alegria and Miller did not respond to ECM’s inquiry. Clark-Meija’s phone line was busy the several times ECM tried to contact her.

Support East County Magazine's reporting on news in the public interest.  Give the gift of community journalism by donating at www.EastCountyMedia.org/donate.

I am a teacher in the Cajon Valley Unified School District. Jill Barto is the only board member who has visited my class and shown an interest in my students. When she was there, I invited her to participate in the student's activity, which she did...much to the delight of the students. Mrs. Barto is clearly an advocate for our students and teachers.
This district has been a mess since Miyashiro was hired. Plummeting test scores, high absenteeism, increases in violent behavior among students and low morale among staff. How does the board deal with it.... flash mobs, and harass the board member that questions and challenges the failure to serve students.
Many have witnessed Dr Miyashiro's bullying of Mrs. Barto and others. The board should have ended it along time ago. Instead, they reinforce his unethical behavior with a salary of 400,000 plus a year.