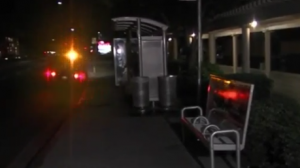 Update January 9, 2018:  The dogs have been found and taken into custody by County Animal Control. No further details have been released pending investigation.

The man suffered non-life threatening bites to his arms and legs and was taken by ambulance to a hospital. Patrons of a barber shop assisted the victim. The bites were deep enough to expose bone,  10 News reports.