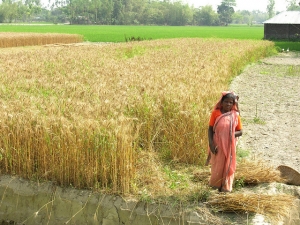 Dear EarthTalk: Is it true that global warming is causing our crops to be less nutritious?

November 9, 2014 (San Diego's East County) - It is difficult to say whether or not the climate change we are now experiencing is negatively impacting the nutritional quality of our food, researchers warn that it may be only a matter of time. “Humanity is conducting a global experiment by rapidly altering the environmental conditions on the only habitable planet we know,” reports Samuel Myers, a research scientist at the Harvard School of Public Health.

Earlier this year, Myers and his colleagues released the results of a six year study examining the nutritional content of crops exposed to levels of atmospheric carbon dioxide (CO2) that are expected to exist by mid-century. The conclusions were indeed troubling. They found that in wheat grains, zinc concentrations were down some 9.3 percent and iron concentrations were down by 5.1 percent across the seven different crop sites (in Australia, Japan and the U.S.) used in the study. The researchers also noted reduced protein levels in wheat and rice grains growing in the CO2-rich test environment.

According to Myers, the findings—published in June 2014 in the peer-reviewed journal Nature—are particularly troubling when one considers that some of the two to three billion people around the world who depend on wheat and rice for most of their iron and zinc already might not be getting enough of these essential nutrients. Zinc deficiency, which can exacerbate pneumonia, malaria and other health problems, is already linked to some 800,000 deaths each year among children under five. Meanwhile, iron deficiency is the primary cause of anemia, a condition that contributes to one in five maternal deaths worldwide.

Myers and company aren’t the only ones worried about global warming and nutrient losses. Another recent study by mathematical biologist Irakli Loladze analyzed data from thousands of “free-air CO2 enrichment experiments” on 130 different species of food plants and found that increased CO2 reduced overall mineral (nutrient) content across the board. “People don't need large quantities of the manganese or potassium they get from plants, but they do need some,” comments David Berreby on BigThink.com in response to Loladze’s findings. “And for billions of people, plants are their only source.”

Berreby is also bothered by another of Loladze’s conclusions, that higher levels of CO2 also spur increases in starches and sugars in the same plants that lose mineral content. “In other words, with increases in atmospheric carbon dioxide, the valuable nutrients in these food crops are scarcer, and carbohydrates are more abundant—in effect, the nutrients are ‘diluted’,” he explains. This syncs with research out of the University of California at Davis, which estimates that the overall amount of protein we get from our food plants will drop some three percent in the coming decades given global warming’s expected arc.

While dramatically reducing our CO2 emissions would be the best way to stave off nutrient losses in our crops, we do have some other options just in case we don’t get our act together regarding fossil fuel consumption. Myers suggests that breeders and genetic engineers could develop new strains of crops designed to be less sensitive to atmospheric CO2 levels and/or higher in mineral content to begin with. Regardless, upping the amount of fruits and vegetables in our diets—perhaps more easily said than done—may be more important than ever in our carbon-intensive world.