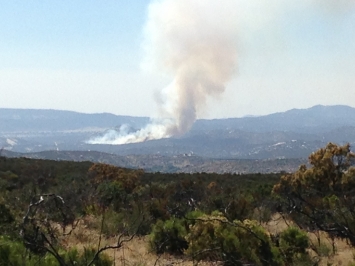 Update August 22:  The fire is 80% contained and holding at 200 acres, per Cal Fire. 175 federal, state and local firefighters have been battling the blaze.  Cause has not been determined.

The fire is burning at moderate rate of spread and no structures are threatened, according to Cal Fire.  The California Highway has ordered closure of La Posta Road.

SDG&E has dispatched its air crane to help battle the blaze.