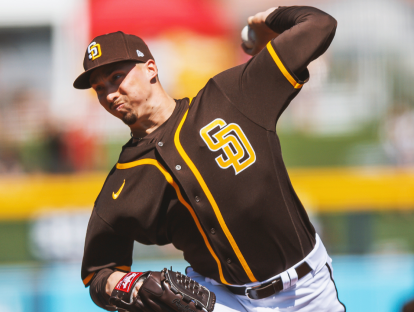 By Liz Alper
Photo via @padres on Twitter
March 21, 2021 (Peoria, Ariz.) - Today, the Padres welcomed the Angels to Peoria for some interleague spring training play.  Shohei Ohtani started for the Angels against Blake Snell.

The Padres started things in the bottom of the first.  After Brian O’Grady’s leadoff triple, Jake Cronenworth scored him with a sac groundout to give the Padres a 1-0 lead after one.

The bats were silent until the sixth when Cronenworth hit an RBI double to right center to score Pedro Florimon.  Wil Myers hit an RBI single to score Ivan Castillo.  Craig Stammen worked some pitcher magic and hit a slow grounder to second that couldn’t be fielded.  A run scored  and the Padres upped their lead to 4-0.
The Angels added one in the ninth from of course, Albert Pujols, but the rally was cut short and the Padres took this one 4-1.
UP NEXT
The Padres travel to Surprise to face the Royals tomorrow.  First pitch is at 1:05 p.m. and the game will not be televised.