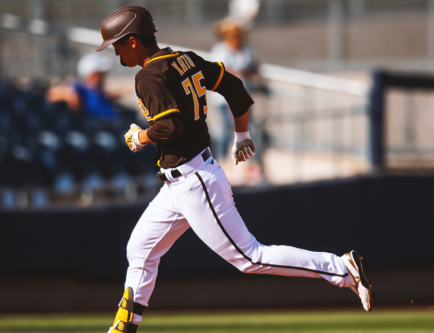 March 3, 2021 (Peoria, Ariz.) - The smell of freshly cut grass.  The sound of bats hitting balls.  Spring training is in the air and the Padres have kicked it off in Peoria, Arizona, hoping for a better result than last season when they were eliminated in the NLDS by the Dodgers.  Today they played a game against the Brewers.  Drew Rasmussen started for the Brewers against new Padre Blake Snell.

The Brew Crew struck first on a wild pitch from Mark Melancon in the second that scored Mark Mathias from third and the Brewers led 1-0 after two.

Pablo Reyes blew the game wide open in the fourth with a three-run blast to left and the Brewers led 4-0 after four.

Jorge Mateo got the Padres on the board with an RBI double in the sixth.  C.J. Abrams scored him with an RBI single and the Padres cut the Brewers’ lead by two to 4-2 after six.

A run came in for the Brewers on Dylan File’s RBI double in the seventh, but Gosuke Katoh tied the game with one swing of the bat in the home half of the seventh with a three-run shot to left--the second of the game for the Padres--and the game was tied at five after seven.

The Brewers reclaimed the lead in the eighth with James Reeves on the mound for the Padres.  Garrett Mitchell hit an RBI single.  Reeves threw a wild pitch to drive in a run.  A sac fly scored Mitchell and the Brewers came back to beat the Padres 8-5.