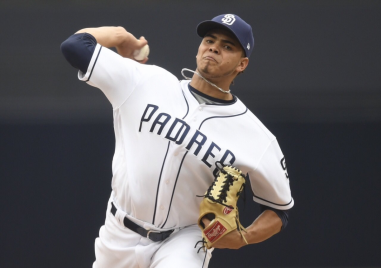 July 29, 2017 (San Diego) - The Padres put in a lot of effort last night and are feeling pretty good about themselves (as they should) after a 3-2 come-from-behind win against the Pirates.  Now it was time for game two.  Ivan Nova started on the hill for Pittsburgh against Dinelson Lamet.

sThe Padres got a good head start.  Jose Pirela tripled in the first to score Manuel Margot and Hector Sanchez doubled to score Pirela and the Padres jumped out to a 2-0 lead out of the gate.

The Padres were looking like the Red Sox all game long.  Hunter Renfroe doubled in the fourth to score Cory Spangenberg to make it 3-0.

Margot continued to be a force as he homered in the fifth to make the score 4-0.

The Pirates started to mount a comeback in the seventh with David Freese’s single that scored Andrew McCutchen.  Francisco Cervelli grounded into a double play that allowed Josh Bell to score, but that was all the Bucs would get and the Padres took game two and the series with a 4-2 win.