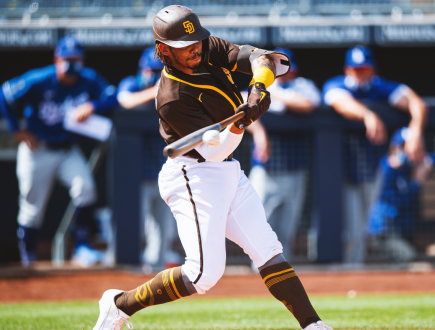 By Liz Alper
Photo via @padres on Twitter
March 21, 2021 (Peoria, Ariz.) - The Padres took on the Dodgers today in spring training.  Dustin May started for the Dodgers against Ryan Weathers.

A.J. Pollock started things for the Dodgers in the first with a solo homer off the center field wall to give the Dodgers a 1-0 lead after one.

Justin Turner added more in the third with a two-RBI single up the middle to put the Dodgers up 3-0.
With the bases loaded in the home half of the third, May walked Jurickson Profar and brought home a run, but that was all the Padres would get.  The Dodgers led 3-1 after three.
Chris Taylor added one more in the fifth with a solo homer to left center to give the Dodgers a 4-1 lead after five.
Suddenly, the Padres started a rally in the seventh when Mike Kickham threw a wild pitch to Luis Campusano, allowing a run to score and the Padres to cut the lead in half to 4-2 after seven.
In the ninth, the Padres added two with Webster Rivas’ two-RBI single to right and the game ended in a 4-4 tie.
UP NEXT
Today, the Padres take on the Angels.  First pitch is at 1:10 p.m.