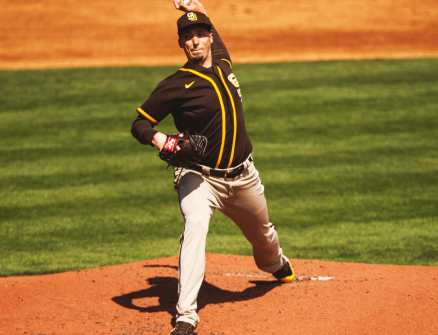 By Liz Alper
Photo via @padres on Twitter
March 15, 2021 (Phoenix) - The Padres traveled to Phoenix to face the Brewers today in spring training action.  Brett Anderson started for the Brewers against Blake Snell.

Eric Hosmer started the scoring in the first with a sac fly.  Tommy Pham was ruled safe at the plate after a brutal collision with catcher Manny Pina.  Jorge Mateo broke the game open with a two-RBI triple.  Pedro Florimon scored him with a sac groundout and the Padres kicked Anderson out of the game.  He was replaced by Clayton Andrews, who eventually finished the half inning, but the Padres were up 4-0 after one.

It stayed quiet for a few innings until the fifth when Brian O’Grady, like a true Irishman, started his St. Paddy’s Day celebration early and blasted a three-run bomb to right to give the Padres a 7-0 lead after five.
The Brewers got on the board in the sixth with Zach Green’s sac groundout and Payton Henry’s single to center to score a run and the Padres led 7-2 after six.
O’Grady added more in the top half of the seventh with a solo shot to center.  C.J. Abrams came up with the bases loaded and launched a grand salami to left and Jake Cousins was kicked off the mound.  Mateo picked up where the Padres left off with an RBI single to left to put the Padres up 13-2.
Pablo Reyes hit a solo shot to left in the home half of the seventh for the Brewers, but the Padres prevailed after an eight inning game, winning 13-3.
UP NEXT
The Padres head back to Peoria tomorrow to host the White Sox.  First pitch is at 1:10 p.m.