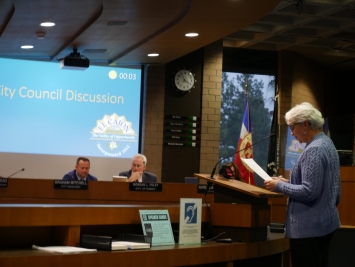 December 18, 2021 (El Cajon) — The El Cajon City Council addressed several agenda items at its last meeting that had potential to either help or hurt those in the homeless community who rely on cars or RVs.

According to the East County Homeless Task Force (ECHTF), the Cajon Valley Union and Grossmont Union High School Districts serve a known homeless population of over 550 families, at least 30 of which are unsheltered and sometimes living in vehicles.

However, after lengthy discussion, the two pressing items — a Safe Parking Program proposal and a zoning code update on RVs — were pushed off to a future meeting so that City staff could look at them in greater detail. Many who spoke at the meeting hoped to see clear actionable steps and less policy mazes on these issues, but the City Council sought to strike a balance.