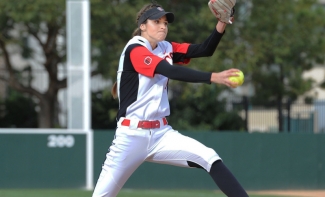 March 30, 2018 (San Diego) - The San Diego State softball team committed crucial errors in the top of the seventh and eighth innings, which allowed Boise State to escape with a 3-1 win Friday night at SDSU Softball Stadium. The Aztecs (10-22, 1-4 MW) and the Broncos (22-11, 5-3 MW) have each won a 3-1 decision heading into the rubber game at noon PT Saturday.

SDSU scored its run on a double steal in the bottom of the sixth with Aris Metcalfe scoring from third.

BS answered in the top of the seventh when Justene Molina scored from third on a two-out error by San Diego State. After the Aztecs left runners on the corners in the bottom of the seventh, Boise State took advantage of another SDSU error to extend the inning and score on a sacrifice fly and subsequent homer.