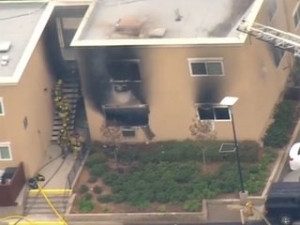 January 31, 2015 (Santee) – A young girl was injured after a fire broke out in a unit downstairs from the apartment she was in with her grandmother  Friday afternoon on Mission Gorge Road in Santee. A firefighter battling the blaze also sustained injury, 10 News reports.

Mehran Farad told 10 News that his roommates were home but sleeping at the time, but added that an explosion near the kitchen awakened them. The roommates escaped safely.

The injured girl and firefighter were reportedly taken to a hospital for treatment.

Two units were declared a total loss from the fire.  Cause of the blaze has not yet been determined.