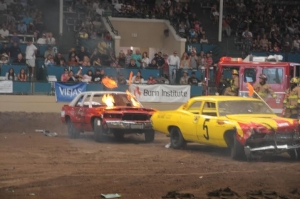 Viejas and State Farm team up for annual smashing event

June 7, 2014 (San Diego) The engines roared and dust filled the large arena at the San Diego County Fair at Del Mar arena, where the cars were ready to go. It was time for the first heat of the Demolition Derby, an event sponsored by the Viejas Tribe and State Farm to benefit the Burn Institute of San Diego. The fair, which opened June 7, continues through July 6. For full information on this year’s fair, visit www.sdfair.com. 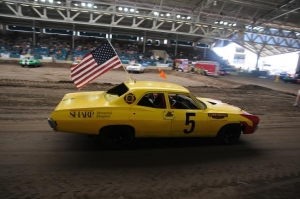 Vehicles smashed against each other, radiators failing, pieces of metal flying as bumpers crunched. Clouds of steam rose from hoods as engines overheated. Tires shredded and drivers fought to keep their vehicles in the action for as long as possible.

This was a job that took crews from every fire department in the County, as well as the Orange County Fire Authority, six months of preparation, including carefully stripping out anything that might injure drivers.

Vehicle 54 caught on fire and firefighters from the Pala Fire Department who were standing by quickly moved into action, putting out the blaze. That car was hoisted out of the pit by a heavy equipment operator with a forklift. It was not the only car that would leave the pit that way. In the course of the day, quite a few more were eliminated and hauled off.

All of the action--fire department competing against fire department in a friendly competition--was done to raise money for the Burn Institute of San Diego, which helps burn survivors. 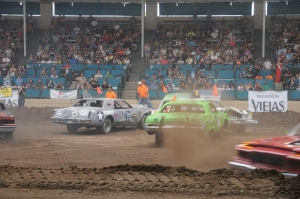 Chief Don Butz from the Viejas Fire Department presented a check for $65,000 to the Burn Institute, that came from Viejas and a panoply of other sponsors including San Diego Gas & Electric, State Farm, Mile of Cars and Paradise Valley Hospital.

In between heats, East County Magazine talked with Lea Hubert of the Burn Institute. She told us that this event “is very popular,” and used to be held at Qualcomm Stadium before moving to the Fair. Historically it was held at the El Cajon Speedway first, but since the Speedway is gone, these days it has a home at the Fair.

The Institute helps burn-injured children and adults from low income families. It is a case by case analysis. Some patients need help with food vouchers, while others need help with getting to doctor’s appointments.

Burn patients face challenges for the rest of their lives, since the scar tissue is not very elastic and children need many surgeries as they grow up. Adults also need a lot of help. 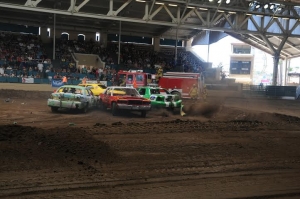 In between the excitement of the demolition derby heats, there were also fire safety demonstrations, as well as CPR instruction early in the morning. CPR is an easy-to-learn skill and it is important that everybody knows how to save a life.

San Miguel Fire brought the “Fire Safe House” where they taught kids the needed skills of “stop, drop, and roll.” These skills can be lifesavers in case of a fire.

A parade of fire trucks displayed units from every department in County, including a truck from Viejas, and a rarely seen (outside of the fire lines) CAL-FIRE bulldozer. This was used to both rebuild the course before the final round and showcase capabilities to onlookers. Among other things, the cap is temperature controlled and the blade is articulated.

The Southwestern College Fire Science Department brought a short course for children to pretend to be fire fighters, with “turn out gear” for children and plastic helmets. They got to play in a dark tunnel that was very short, and to pull a two-inch hose. Children enjoyed this a lot. They were also able to see firefighting equipment and demonstrations of auto rescues as well as rappelling/climbing skills performed by lifeguards.