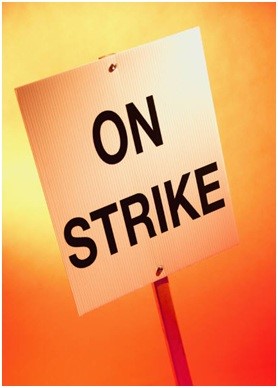 March 27, 2022 (San Diego) -- United Food and Commercial Workers (UFCW) Locals throughout California, together representing over 47,000 frontline food workers at Ralphs, Albertsons, Vons, and Pavilions, have announced an overwhelming membership vote to authorize union leadership to call for Unfair Labor Practice (ULP) strikes should that become necessary. But it’s not yet inevitable that a strike will occur.

UFCW Local 135 member Patty Figueroa, a bakery clerk at Albertsons in Lemon Grove said, “I voted yes because I feel like I’m struggling. Every day is a lot of hard work and its barely enough money to pay bills. I don’t want to live paycheck to paycheck. These companies are making a lot of profits off our hard work and they violate our rights. They need to do better for us. ”

The union’s contract expired March 6 and so far, negotiations have stalled.

The Los Angeles Times reports that Ralphs has begun hiring temporary workers in anticipation of labor walkouts. In a statement, the company indicated its stores will remain open. “ “No one wins in a strike — not our associates, not our company, not our communities and not the union,” the Ralphs statement indicates. Ralphs has also claimed the union’s demands could lead to sharp rises in grocery prices.

But the UFCW, in a press release from the seven locals, states, "California’s essential grocery workers made their voices heard with an overwhelming vote to stand together against the repeated and egregious unfair labor practices that Ralphs and Albertsons/Vons/Pavilions have engaged in.

The labor group’s release continues, “Through the past two years of the pandemic, it was the hard work and sacrifice of our members that helped these same companies earn billions in profits. As we continue at the bargaining table, all of our Local Unions are committed to getting a contract that reflects everything these essential grocery workers have contributed to their employers, their customers, and their communities.”

Kroger’s, which operates Albertson’s, Vons and Pavilion, had its operating profit nearly double during the pandemic, to $4.3 billion from 2018 to 2021, the Los Angeles Times reports.

Negotiations resume March 30th with UFCW and the grocery chains. No dates have been set yet for a strike.

The seven UFCW Locals have filed Unfair Labor Practice charges against  the grocery chains with the National Labor Relations Board (NLRB), claiming these employers have undermined contract negotiations and workers’ rights to representation by committing unlawful conduct that jeopardizes the bargaining process, violates federal labor law and intimidates workers.

The specific charges against Ralphs and Albertsons/Vons/Pavilions include refusing to implement wage increases as required by contracts and giving workers small, token bonuses instead of bargaining for wage raises per the negotiations process. The union claims this  led to many workers feeling intimidated and bribed into accepting a bonus rather than a permanent wage increase.

In addition, the union asserts that Albertsons/Vons/Pavilions has been conducting unlawful surveillance of workers protesting low wages and short hours in an attempt to prevent those employees from getting their message out to the public.

“These unlawful practices undermine workers’ rights and ability to negotiate a fair contract and further intimidate and attempt to weaken the collective power of hard-working essential grocery workers throughout California,” a press release from UFCW states.