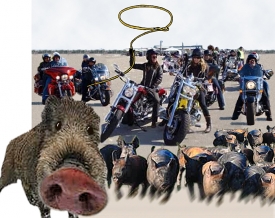 “Modeled after the Bureau of Land Management’s popular program for reducing surplus wild mustangs on public lands, our County has teamed up with Cleveland National Forest and local Harley Davidson clubs to sponsor the first annual Hog Wild pig roundup and run,” Supervisor Dianne Jacob announced, cutting a ribbon as a herd of stampeding pigs raced through the streets of Lakeside.

Plump porkers were rounded up on U.S. Forest Service lands along Boulder Creek, branded by 4-H students, then herded by volunteer cowboys through rugged canyon terrain. Next, the squealing swine were swum across El Capitan Reservoir and then trotted across the El Monte Valley. From there, Harley Davidson motorcyclists on their two-wheeled “Hogs” ran the wild pigs through the streets of downtown Lakeside. Crowds cheered along the stampede route, which ended at the Lakeside Rodeo Grounds.

Prime porkers were selected to compete in special rodeo events including bucking boar riding, a pig-roping contest, and a hog-calling competition led by Supervisor Bill Horn.

In addition, a public auction was held. Winning bidders pledged to protect their porkers from harm, as part of a USFS settlement of demands by PETA protesters . (Counter-protesters in aprons , brandishing BBQ forks, demanded a pig roast.) Like the wild mustangs culled from our public lands, these savage boars and sows may be gentled, trained, saddled and bridled for use as companion animals or riding stock.

“We are confident that this event will become an annual tradition,” Lakeside’s Chamber of Commerce president declared, “generating not only community pride, but also tourism dollars—all by bringing home the bacon.”