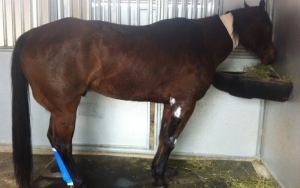 March 14, 2015 (Alpine)--A horse hit by a vehicle is back with his owner after being rescued by County Animal Services early Wednesday morning.

Two horses were running loose in the Alpine area when they were both struck by vehicles shortly before 3 a.m., as ECM reported. One horse was hit by a car traveling 65 mph on Interstate 8 and was killed on impact. The second horse was hit by a pick-up truck going 35 mph on Willow Road and was injured.

Both vehicles were severely damaged but the drivers managed to walk away from the accidents.

The California Highway Patrol called out Animal Control Officers and they were able to load the surviving bay gelding onto a trailer and take him to the County shelter in Bonita. An emergency equine veterinarian treated the horse for a serious injury to a rear leg and other cuts and scrapes. He is expected to fully recover.

The owner saw the story on the news and recognized her horse. She went to the nearby ranch where she boards her horse and saw he was missing.

“The gate containing the horses is normally clicked shut, but when she arrived, she said the main gate to the boarding facility was open and four horses had been let out of their pens,” said County Animal Services Deputy Director Dan DeSousa. “Two were still at the ranch but the other two had apparently wandered out into traffic.”

The owner called Animal Services, identified her horse and picked him up Wednesday afternoon.

How could horses get out of a corral, barn or stall? Is the owner negligent?