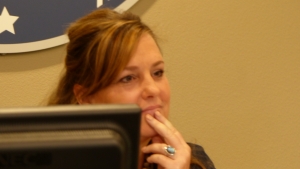 June 11, 2019 (El Cajon) -- The high drama and hijinks which have been commonplace lately at Cajon Valley Union School District (CVUSD) board meetings continued at the May 28th session. At one point the meeting was adjourned during a fracas among individuals outside the board room, overshadowing reports on district accomplishments. The action of adjourning, then reconvening the meeting for subsequent discussion and voting on agenda items raises new legal concerns.

Listen to audio: CVUSD meeting 5-28-19 adjourns in mid-session before reconvening
Excerpts of public comments at 5-28-CVUSD meeting including ECM editor MIriam Raftery and others
Download:

Excerpts of public comments at 5-28-CVUSD meeting including ECM editor MIriam Raftery and others
Reagles threatens Barto with recall on 5-3-19
Download:

Reagles threatens Barto with recall on 5-3-19