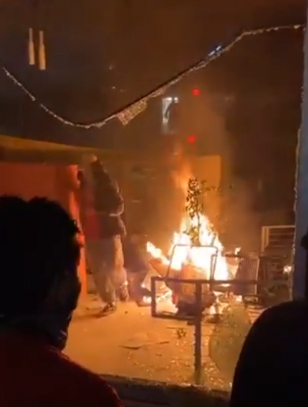 February 23, 2021 (La Mesa) - The long-anticipated independent report on the La Mesa Police and city’s responses to the May 30-31, 2020 riots was released and reviewed at the January 26 City Council meeting. The creation of the report included briefings from the City Council, City officials, the La Mesa Police Department (LMPD) Heartland Fire and Rescue Department, the Citizen Public Safety Oversight Task Force as well as community outreach, as ECM previously reported.

The community has been calling for reform and change for several years following multiple poor encounters police have had with La Mesa residents, including when a school officer body slammed a black female student at Helix Charter High in 2018, reported KPBS.

The 2020 riot followed a racial justice protest over both national and local policing issues including the killing of George Floyd in Minneapolis and a La Mesa Police officer’s controversial stop of Amaurie Johnson on May 28, two days before the riot, an action widely viewed as racial profiling.  The officer involved in the Johnson stop has since been fired and criminally charged for filing a false report.

A protest at the LMPD headquarters escalated into a riot, resulting in loss of three buildings to arson and the looting of dozens of La Mesa businesses.

Councilman Jack Shu suggested the report doesn't go far enough. “Two and a half years ago, we said, based on their (LMPD) response from the Helix incident, `We think you need to have a civilian oversight board, a real one that's very effective. In fact, we want the state of the art in terms of oversight by civilians" Shu and others met with the police chief repeatedly over many months, he said, adding that an initial plan was "deficient" though  a citizens police oversight board was finally formed. "So to me, all that needs to be part of the after-action report,"Shu added. "The action didn't start on the 30th. The action started, way before that.”

The after-action report ultimately made 13 recommendations to the City of La Mesa and the La Mesa Police Department. Each of them targets a specific way to improve communications and emergency responses, including tackling outdated policies and streamlining radio contact. Some of the recommendations include:

● Routinely review and update a formalized emergency communications plan for the City of La Mesa that includes all city departments. Assign trained personnel to ensure when emergency information will be communicated across city departments and to the community.
● Regularly review applicable revisions of the LMPD's use of force policies to reflect best practices including, but not limited to, considering increasing its emphasis and guidance on de-escalation and force options, and banning chokeholds or similar holds except under deadly force circumstances. (LMPD recently banned use of chokeholds.)
● Consider developing new policies and training regarding community policing, community engagement, cultural competency and bias-based policing. Consider developing a written comprehensive community policing and community engagement strategy that identifies goals, objectives and measurable outcomes for all units of the Department.
● Consider developing and issuing a crowd-control policy that emphasizes First Amendment rights to free speech and peaceful protest, outlines preparation and planning efforts, describes use of force options, emphasizes de-escalation, provides guidance on the use of the Incident Command System and other guidance and procedures related to controlling crowds.

Acting Chief of Police Matt Nicholass sent a memo on January 21 to the City Manager Greg Humora addressing the recommendations made in the after-action report. In the memo, Nicholass comments on what the police department learned from the incident and how these recommended changes are being implemented.

“Since the events on May 30th, the police department has increased its use of social media platforms to aid in information sharing with the community,” Nicholass wrote. “The LMPD's goal is to share more frequent updates before, during, and after scheduled protest events and/or emergency incidents to provide the community with the most up-to-date information available. The Department has also made a conscious effort to work with other City staff to improve internal communications.”

“I think we're far from where we want to be. And I think we'removing in the right direction,” Shu said. “But there are, you know, a lot of changes in law enforcement that we need throughout the country. And if we can do it in the city of La Mesa quickly, I hope we can show leadership to the rest of East County and on how we can make those changes.”