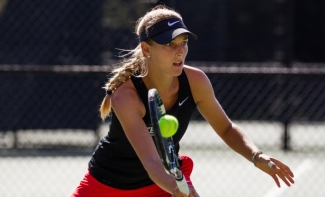 Buth enters her second season of consistent top-seed play in both singles and doubles for the Aztecs. The Kaiserslautern, Germany native owns a perfect 3-0 record in both doubles and singles play this season and helped the Aztecs claim victories against UC San Diego (5-2) and UC Irvine (7-0) last weekend.

Buth paired up with senior Paola Diaz in both doubles matches, going 6-3 against UCSD’s Ashley Chao and Becky Chou, and notched a 6-0, 7-6 (4) win over Chao in the No. 1 singles contest on Saturday. Buth and Diaz nabbed another doubles match on Sunday against UCI’s Flora Amiri and Yulin Chen, 6-2, and Buth remained hot against Vivien Dvali to record a 6-1, 6-2 victory in singles.